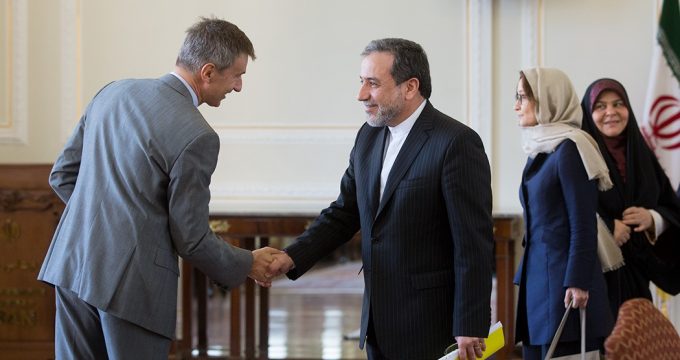 MNA– After holding two rounds of political consultations in Bern in June 2016 and 2017, Iran and Switzerland held the 2018 edition (third round) of the talks in Tehran on Monday.

Iranian Deputy Foreign Minister for Political Affairs Seyyed Abbas Araghchi and Swiss Secretary of State for Foreign Affairs Pascale Baeriswyl held the third round of political consultations between Iran and Switzerland on Monday in Tehran.

The meeting was held in Tehran while the former two editions of the bilateral political consultations between Iran and Switzerland were held in Swiss capital city of Bern.

The second round of political talks between Iran and Switzerland was held on June 17, 2017 in Bern, Switzerland with Majid Takht-Ravanchi the then Iran’s Deputy Foreign Minister and Swiss Secretary of State for Foreign Affairs Pascale Baeriswyl heading the two delegations.

Iran’s Deputy Foreign Minister for American and European Affairs Majid Takht Ravanchi and Secretary of State at the Swiss Foreign Ministry Yves Rossier opened the first round of Tehran-Bern political talks on June 17, 2016 in Bern.