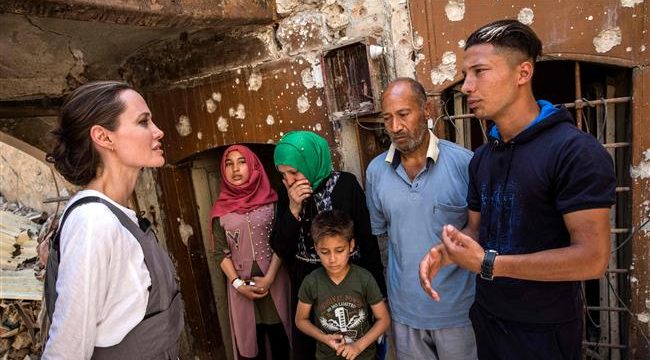 Angelina Jolie talks of ‘worst devastation’ in visit to Mosul

Press TV- American actress Angelina Jolie has visited Mosul as the UN refugee agency special envoy, recounting devastation wrought on the northern Iraqi city mostly by US airstrikes as the worst she had ever seen.

The Hollywood actress visited the city on Saturday, less than a year after Iraqi forces seized Mosul from Daesh militants, who had occupied it three years earlier and turned it into a stronghold of their “caliphate”.

The lead-up to the city’s recapture saw intensive bombing by the US and its allies, which drew criticism from many Iraqis including popular mobilization units which were prevented from entering the city.

“This is the worst devastation I have seen in all my years working with UNHCR. People here have lost everything,” Jolie said in a statement issued by the UN High Commissioner for Refugees.

Normalcy has returned to many parts of Mosul, with displaced residents leaving camps nearby and going back home, but the old city in western Mosul is largely destroyed.

“They are destitute. They have no medicine for their children, and many have no running water or basic services,” she said.

“I hope there will be a continued commitment to rebuilding and stabilizing the whole of the city. And I call on the international community not to forget Mosul.”

Mosul fell to Daesh on June 10, 2014 as troops under the control of the US-backed former president of the Iraqi Kurdistan Region Masoud Barzani vanished without putting up any significant resistance.

The military campaign to recapture Mosul was carried out by a 100,000-strong alliance of Iraqi government units, Kurdish Peshmerga fighters and Shia militias.

Some of the fighters, including Hashd al-Sha’abi militias, were seasoned liberators who had earlier recaptured several cities with minimum damage to civil structure.

The military campaign to recapture Mosul saw 900,000 residents flee, leaving parts of the city totally obliterated similar to what happened under US airstrikes to Raqqah in neighboring Syria which was once the seat of Daesh.

An Iraqi woman holds up a portrait of a missing relative, who was held captive by the Daesh Takfiri terror group, during a demonstration in the eastern part of the northern city of Mosul, April 13, 2018. (Photo by AFP)

In February, UN Secretary-General Antonio Guterres said 2.5 million remained displaced in Iraq in the aftermath of the Daesh military campaign.

He made the remarks during an international conference in Kuwait to raise funds for reconstructing Iraq, where the United States made it clear that it did not have any plans to allocate money for the purpose.

The US first invaded Iraq in 2003 under the pretext of ridding the country of weapons of mass destruction – an allegation which was later proven wrong.

The invasion touched off a cycle of sectarian strife and chaos which led to the rise of Daesh and its brutal campaign to establish a caliphate.