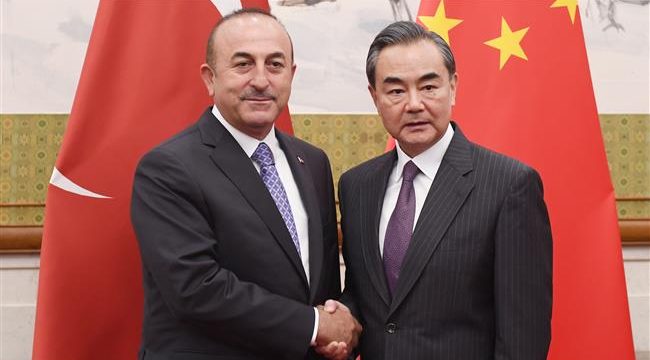 Press TV- China’s State Councilor and Foreign Minister Wang Yi says dialog and cooperation are key to maintaining a multilateral nuclear agreement signed between Iran and the P5+1 group of countries in 2015.

Wang made the remarks at a joint news conference with his Turkish counterpart Mevlut Cavusoglu following their meeting in Beijing on Friday, several weeks after the US pullout from the nuclear agreement, officially known as the Joint Comprehensive Plan of Action (JCPOA).

“Of course, this deal cannot solve all problems, just as an umbrella cannot cover the heads of 100 people. Issues outside the deal should be solved through other dialogs,” Wang said.

“The key is to be patient and maintain the dialog mechanism instead of resorting to confrontation,” he added.

US President Donald Trump announced on May 8 that Washington was walking away from the nuclear agreement, which was reached between Iran and the five permanent members of the UN Security Council – the United States, Britain, France, Russia and China – plus Germany.

Wang said the nuclear deal is a hard-won achievement of multilateralism and called for its preservation through adhering to principles, dialog and cooperation.

The top Chinese diplomat said the JCPOA has been endorsed by the United Nations Security Council and has played an effective role in safeguarding the international nuclear non-proliferation regime, and promoting peace and stability in the Middle East.

“There is a general consensus on this in the international community. The IAEA (International Atomic Energy Agency) has issued reports to confirm that Iran has been meeting its commitments under the deal for 11 successive times,” Wang said.

“So there is no reason not to ensure the solemnity and authority of such an effective agreement,” he pointed out.

Earlier this month, the IAEA Director General Yukiya Amano reaffirmed the agency’s accesses to all the required nuclear sites in Iran, calling on Tehran to ensure “timely and proactive cooperation” with inspections under the JCPOA.

“As stated in my latest report to the Board [of Governors], the agency has conducted complementary accesses under the Additional Protocol to all the sites and locations in Iran which we needed to visit,” Amano said on June 4 in his introductory statement to the Board of Governors.

The Chinese state councilor also said that the international community has made great efforts over the past decade on the Iran nuclear issue in order to address the concerns of all parties and turn confrontation into cooperation.

“China has always carried out public and transparent cooperation with Iran that benefits people’s livelihood under the premise of fulfilling its international obligations. We are also glad to see the international community communicate and cooperate with Iran,” Wang said.

He expressed hope that nothing would disturb the continuation of such mutually beneficial cooperation.

Iranian President Hassan Rouhani told his Chinese counterpart Xi Jinping on June 10 that China played an important and effective role during the negotiations between Iran and major world powers that led to the conclusion of the historic nuclear agreement.

“Now, Beijing has also a very important role in the reinforcement of the JCPOA and fulfillment of the other sides’ commitments,” Rouhani said.

Speaking at a joint press point with the Chinese foreign minister in Brussels on June 1, the European Union foreign policy chief Federica Mogherini said the bloc and China share commitment to preserve the nuclear agreement and to work for its continuation.

Mogherini said, “Indeed, we are one hundred percent determined to continue cooperation between China and the European Union, but I can add also with Russia as it belongs to the signatory countries, but also with other partners internationally who are committed to preserve the nuclear deal and its full implementation.”