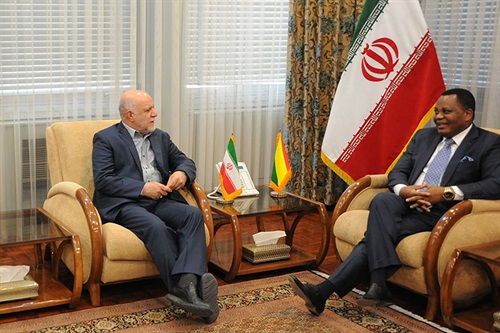 The two sides considered membership of the central-African country in the Organization of Petroleum Exporting Countries (OPEC). If approved by all members of the oil producing group, Congo will be the 15th member of the organization.

Congo (Brazzaville) is among the top five oil producers in Sub-Saharan Africa. Oil production comes almost entirely from offshore oil fields. Congo exports almost all of its oil production, and the largest recipients are China and the European Union.

Congo holds 1.6 billion barrels of proved crude oil reserves, according to the latest estimates from Oil and Gas Journal (OGJ) released in January 2014.
Asked after the meeting whether he would attend the 7th international seminar of the OPEC in Vienna, Mr. Zangeneh said: “Probably”.
The two-day seminar is being held in Vienna on June 20-21.
Bijan Zangeneh, Iran-Congo ties, Jean-Claude Gakosso, OPEC June 14, 2018
Trump, Kim agreement reduced risk of military conflict
Iran to give reprimanding response to enemy’s plots