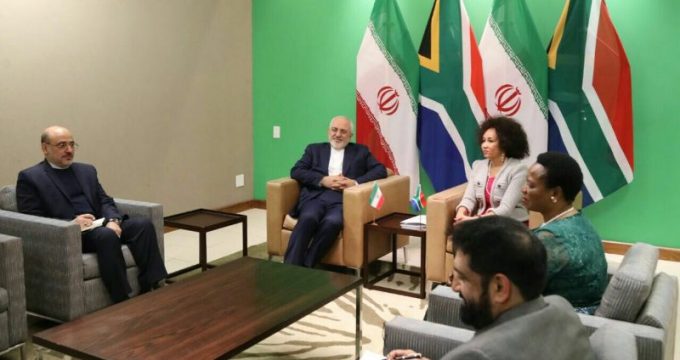 During his stay in Pretoria, Zarif held separate meetings with five ministers of the South African government, namely those of international relations and cooperation, defense and military veterans, economic development, transport, and trade and industry.

He also met with President of South Africa Cyril Ramaphosa for talks on the bilateral relations and major regional and international issues.

Talking to reporters upon his arrival in South Africa, Zarif said that Iran has not received any practical package from the Europeans.

“We have not received necessary practical package but EU member states and our Russian and Chinese colleagues are working on the package,” he noted, adding that all are exploring ways of ensuring that they can provide Iran with the benefits envisioned in the deal.

The Iranian foreign minister also stressed that Iran has always stood by the South African nation, and that Pretoria, in exchange, supported the Iranian nation’s nuclear rights

The Iranian diplomatic chief also took part in a banquet given in his honor by Ms. Sisulu.

In a meantime, Iran and South Africa expert meeting was held in Pretoria aimed at considering economic and transport issues as well as facilitating visa issuance between the two countries.

The talks were held within the framework of four expert groups in different fields of economic, trade and finance.

In a tweet at the end of his trip, the top Iranian diplomat lauded his tour to South Africa as fruitful.

“Delighted to be back in South Africa, long-time friend & partner of #Iran and solid JCPOA supporter. Excellent talks w/ Min @LindiweSisuluSA & other ministers & w/ Pres @CyrilRamaphosa to forge closer cooperation. Agreed on a joint mechanism to turn political will into action,” Zarif wrote in his Twitter page on Wednesday.

Eventually, Zarif left Pretoria for Tehran late on Wednesday after a two-day visit to South Africa.

South Africa is the second biggest economic power in African continent and after implementation of the JCPOA they broadened cooperation with Iran enormously.