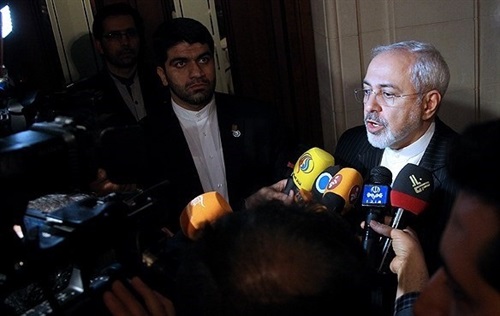 No practical package delivered to Iran by Europeans yet: FM

IRNA- Iranian Foreign Minister Mohammad Javad Zarif said on Tuesday that Iran has not received any practical package from the Europeans.

‘In the latest round of expert talks with the Europeans on the JCPOA held in Tehran last week, all remaining parties to the deal announced their compliance with the it. However, we have not received the necessary practical package from them,’ Zarif told reporters upon his arrival in South Africa.
During the Tehran talks, the European sides announced their commitment to taking necessary measures to ensure that Iran would enjoy necessary economic guarantees, he said.

‘We have not received necessary practical package but EU member states and our Russian and Chinese colleagues are working on the package,’ Zarif said, adding that all are exploring ways of ensuring that they can provide Iran with the benefits envisioned in the deal.

All the measures being taken by Iranian officials are aimed at ensuring that the Iranian nation will receive all benefits that it should get from the nuclear deal.

On ties between Iran and South Africa, Zarif said Iran has always stood by the South African people.

Following the victory of the Islamic Revolution, Iran severed its diplomatic ties with the Apartheid regime but since the victory of the South African people, Tehran established the best relationship with Pretoria, the Iranian foreign minister said.

Zarif said he is scheduled to hold two rounds of talks with his South African counterpart and meet the president of the country tomorrow.