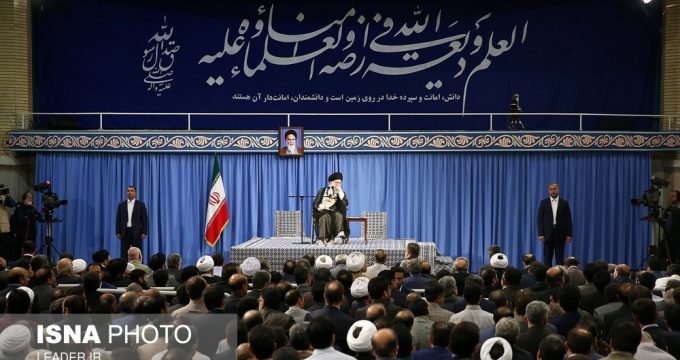 Press TV- Leader of the Islamic Revolution Ayatollah Seyyed Ali Khamenei says the fate of Palestine must be determined by Palestinians, including Muslims, Jews and Christians, who originally lived in the historical land of Palestine.

“Today, democracy is a modern method, which is accepted by the entire world. We said that to determine the fate of the historical country of Palestine, they must refer to the people of Palestine and this proposal has been registered at the United Nations as the Islamic Republic’s opinion,” Ayatollah Khamenei said in a meeting with a group of university professors and academics in Tehran on Sunday.

The Leader added that a poll must be conducted among Palestinians, who have lived there since 100 years or 80 years ago, including Muslims, Jews and Christians, and whether they live inside our outside the occupied territories.

“Then whatever they said [and voted for] it must be done. Is this a bad idea? Aren’t European countries ready to understand this?” the Leader asked.

Leader of the Islamic Revolution Ayatollah Seyyed Ali Khamenei addresses a meeting with a group of university professors and academics in Tehran on June 10, 2018. (Photo by leader.ir)

Referring to a recent European tour by the Israeli Prime Minister Benjamin Netanyahu in which he aimed to undermine Iran’s standing and influence in the region, Ayatollah Khamenei said, “Then that oppressor [and] wicked … child killer goes [to other countries and] plays the victim that Iran wants to do away with several millions of our population.”

“That European audience also listens to him, shakes his head and does not say that it is you [Israelis] who are currently committing these crimes in Gaza and al-Quds,” the Leader noted.

“This is why [the Islamic Republic] also has wicked and determined enemies,” the Leader emphasized.