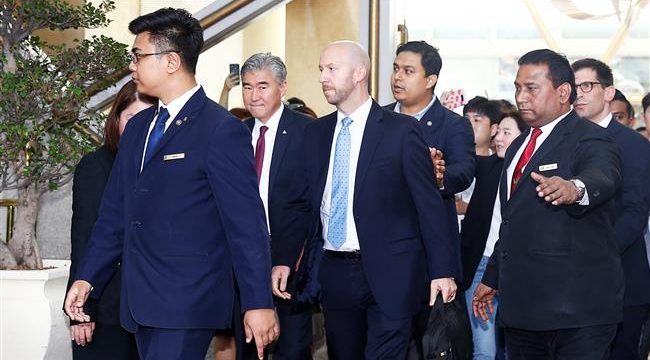 Press TV- High-ranking officials of the US and North Korea have sat down for talks in Singapore in the lead-up to an unprecedented summit between their leaders, which Pyongyang says will focus on lasting peace and nuclear-free Korean Peninsula.

The working-level talks on Monday were aimed at narrowing the differences and making final preparations on the eve of the much-awaited summit between US President Donald Trump and North Korean leader Kim Jong-un.

The US delegation in the preliminary talks was led by Ambassador to the Philippines Sung Kim, a veteran diplomat who recently held talks with North Korean officials. The North Korean delegates were also headed by Vice-Foreign Minister Choe Son-hui.

Trump and Kim arrived in Singapore on Sunday to hold the first ever face-to-face meeting between leaders of the two countries, which have remained enemies since the 1950-1953 Korean War.

On Monday, North Korea’s official KCNA news agency, which portrays the views of the government, commented for the first time on the agenda of the upcoming summit, saying the two sides would exchange “wide-ranging and profound views” to reset relations.

Pyongyang had earlier dismissed any unilateral nuclear disarmament, and the KCNA’s reference to “denuclearization” has historically meant that the North wants the US to remove its “nuclear umbrella” protecting its allies in the region, South Korea and Japan.

US Secretary of State Mike Pompeo also posted a tweet from Singapore and said his country is “committed to the complete, verifiable, irreversible denuclearisation of the Korean Peninsula.”

Hours after touching down in Singapore, Trump took to Twitter and said there is “excitement in the air” in Singapore ahead of his meeting with Kim.

US President Donald Trump (2nd L) and his delegation share a working lunch with Singapore’s Prime Minister Lee Hsien Loong (3rd R) and his team during the US leader’s visit to The Istana, the official residence of the prime minister, in Singapore on June 11, 2018. (Photo by AFP)

He later held a launch meeting with Singapore’s Prime Minister Lee Hsien Loong, during which he sounded a positive note on his upcoming talks with the North Korean leader.

“We’ve got a very interesting meeting in particular tomorrow, and I just think it’s going to work out very nicely,” Trump said.

Lee had received the North Korean leader on Sunday.

The Trump-Kim summit will be held at Capella Jotel on Sentosa, a resort island off Singapore’s port with luxury hotels, a Universal Studios theme park and man-made beaches.

Singapore’s premier said on Sunday that hosting the historic summit would cost the nation around $20 million.

Trump and Kim are staying in separate hotels in the famous Orchard Road area of Singapore.