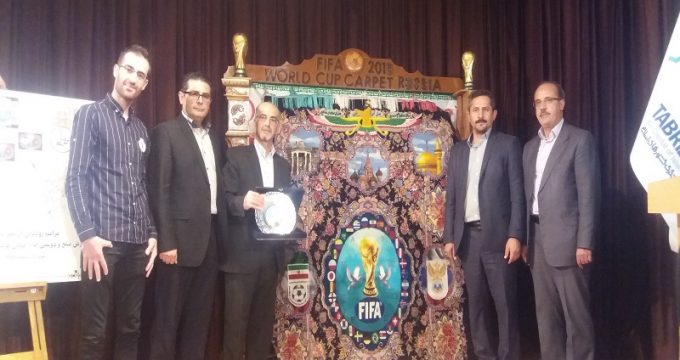 RFERL | Frud Bezhan: Iran’s national team will lock horns with the heavyweights of soccer at the World Cup in Russia this month. But before the clashes begin, Team Melli is in a gift-giving mood.

The squad plans to present silk Persian carpets to FIFA, the world governing body of soccer; the Russian Football Union; and the national teams of Spain, Portugal, and Morocco, Iran’s opponents in the group stage of the tournament. Two other carpets are reserved for the Iranian Football Federation and the Astan Quds Razavi, the organization that runs Iran’s holiest sites.

Iran’s carpet diplomacy gives it a chance to showcase the country’s rich history and culture on the world stage, where it often plays the role of international pariah notorious for it theocratic regime, suppression of human rights, and controversial nuclear program.

Iran began gifting its most famous export during its 1998 World Cup appearance in France, when it gave a Persian carpet to soccer star Zinedine Zidane through an intermediary, former FIFA President Sepp Blatter.

Zidane, who scored twice in the final for cup winner France, earned Golden Ball honors for most goals scored and was named to the tournament all-star team. Zidane was born to parents from Muslim-majority Algeria.

Team Melli secured its first-ever World Cup win in the ’98 tournament, beating its geopolitical rival the United States 2-1 in the group stage. In one of the most politically charged World Cup games in history (it was dubbed “the mother of all games” by one U.S. soccer official), the Iranian players gave flowers to their American rivals during the prematch handshake and posed together for a group photo.

Since then, Team Melli has gifted carpets to its opponents at the World Cup in Germany in 2006 and Brazil in 2014.

The carpets for the last five tournaments have been designed by artist Hossein Kazemi-Hamed. He was quoted by Iran’s IRIB news agency as saying that it took more than six months to weave the seven carpets to be given away this year. The weavers were all from Tabriz, the capital of Iran’s East Azerbaijan Province known for its carpets.

“The goal of weaving these carpets is to introduce Iranian culture at the international stage,” IRIB quoted Kazemi-Hamed as saying. “The carpets will go down in history.”

Prior to the 2014 World Cup, Kazemi-Hamed told BBC Persian that “the main symbol of this carpet is the message of peace and friendship in the world.”

The carpets that will be gifted in Russia feature the World Cup trophy, the tournament’s official mascot, Zabivaka, as well as images of famous landmarks in Russia and Iran. Each of the carpets will also have unique details relating to the nation or body that will receive them.