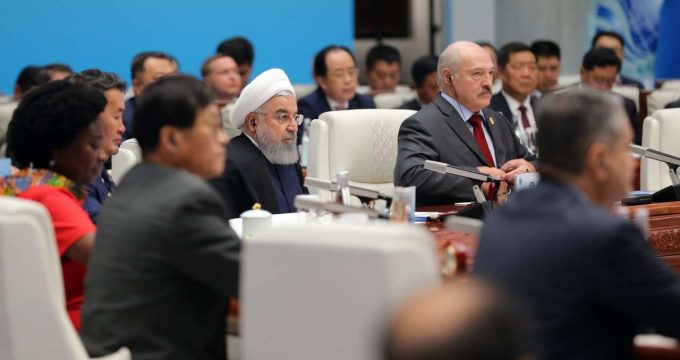 Rouhani warns of US unilateralism threat in address to SCO summit

Addressing the 18th summit of the Shanghai Cooperation Organization (SCO) in the Chinese port city of Qingdao on Sunday, Rouhani warned of threats posed by economic, political and legal unilateralism to regional convergence.

He also stressed that “unilateral sanctions are not only against international rules and regulations, but also damage legitimate international trade,” adding, “the United States’ attempts to impose its own policies on others is a growing danger.”

The Iranian president further described Washington’s recent decision to withdraw from the 2015 nuclear agreement as “a recent example of the United States’ unilateralism and indifference towards the opinions of the international community.”

He emphasized that the Islamic Republic has so far lived up to all its obligations under the Joint Comprehensive Plan of Action (JCPOA) and the International Atomic Energy Agency (IAEA) has so far confirmed Iran’s commitment to the terms of the deal.

Last month, US President Donald Trump announced Washington’s pullout from the JCPOA, vowing to reinstate nuclear sanctions on Iran and impose “the highest level” of economic bans on the Islamic Republic.

Rouhani appreciated efforts by China and Russia to preserve the nuclear accord, saying, “All signatories to the JCPOA have a responsibility regarding the commitments of removing sanctions under the JCPOA, and also based on Resolution 2231 of the UN Security Council and Article 25 of the Charter of the United Nations are responsible to help full implementation of the JCOPA and prevent any move that poses an obstacle on implementation of the JCPOA.”

He also noted that the remaining parties to the deal have “a limited opportunity” to provide the “necessary guarantee in action to help implement all the agreed conditions in the JCPOA and continue being a party to this agreement.”

“Definitely, the US has monitored the reactions to its withdrawal from the JCPOA and considers the lack of response to its unilateral withdrawal as not being costly, which will have very bad consequences for the international community,” he pointed out.

Chinese President Xi Jinping also expressed dismay at the “unilateral” US pullout from the JCPOA, saying Beijing is prepared for cooperation with other countries to save the agreement.

“We are upset by the US unilateral decision to withdraw from the Joint Comprehensive Plan of Action on the Iranian nuclear program. China is ready to cooperate with Russia and other countries to preserve the JCPOA,” he told the summit.

Additionally, Russian President Vladimir Putin said Moscow would continue to abide by the terms of the Iran nuclear deal.

Russia is concerned that the situation in the region might spiral out of control as a result of Washington’s exit from the JCPOA, he added.

“The US withdrawal can destabilize the situation,” Putin said, stressing that Russia “will, for its part, continue to comply with all its obligations under the deal.”

Elsewhere in his address, the Iranian president warned of the threat posed by terrorism, separatism and extremism to the world, calling for an increase in intelligence exchange between regional countries in a bid to weaken terrorist groups.

The Islamic Republic, he said, “has invaluable experience in curtailing and weakening of extremist and terrorist currents, an example of which is cooperating with the government of Iraq and Syria in fighting ISIS (Daesh) terrorist.”

The intergovernmental organization seeks to strengthen mutual trust and good neighborly ties between the member countries, contribute to regional stability and facilitate cooperation in different sectors, including political, trade, economic and energy issues.