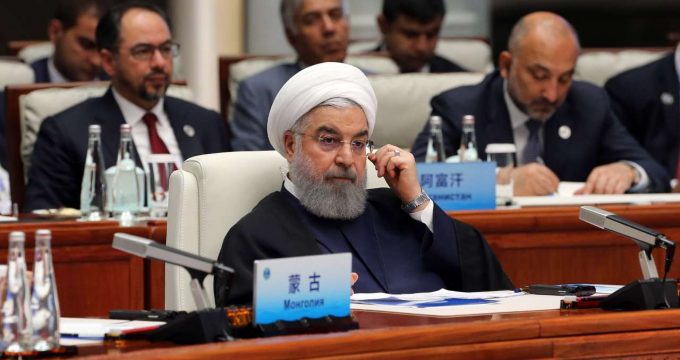 Rouhani warns of US unilateralism threat in address to SCO summit

Iran’s President Hassan Rouhani has slammed US attempts to impose its own policies on others, saying Washington’s “unilateral sanctions” damage international business.

Russian President Vladimir Putin has criticized the U.S. withdrawal from the Iranian nuclear deal in a speech at a regional summit in China.

China regrets the unilateral decision of the United States to pull out from the Joint Comprehensive Plan of Action (JCPOA), informally known as the Iran nuclear deal, and is ready to conduct joint work with Russia and other states to preserve this agreement, Chinese President Xi Jinping said.

Iran not to wait for Europe’s vague promises

The Iranian Parliament Speaker Ali Larijani says that Iran cannot wait for too long to see if Europe can preserve the nuclear deal, calling on Europeans to announce their clear decision sooner.

Majlis (the Iranian Parliament) voted for the postponement of accession to Terrorist Financing Convention (formally, the International Convention for the Suppression of the Financing of Terrorism).

Commander of the Islamic Revolution Guards Corps Ground Force said Sunday that his forces have smashed two terrorist teams in northwest Iran over the past 24 hours, only a day after disbanding a 7-storng team of intruders.

Boeing $20b loss hard to make up for: Iran MP

Boeing cancelled its agreement with Iran and lost $20b, which is hard to compensate, said an Iranian parliamentarian on Sunday.

Deputy FM Araghchi urged accession to the Convention for the Suppression of Financing of Terrorism, saying cutting off lines of financial support for terrorists is impossible without international cooperation.

In a meeting with Indian Prime Minister Narendra Damodardas Modi on Sunday, Dr Rouhani emphasised that the Islamic Republic of Iran welcomes development and deepening of the inclusive relations with India as a friend country in the region and is ready for strategic cooperation with the country.

AEOI Chief: Iran to end construction of ion-therapy hospital in 2021

Head of the Atomic Energy Organization of Iran (AEOI) Ali Akbar Salehi announced that the construction work for building a special hospital to treat cancer patients with ion-therapy will end in 2021.