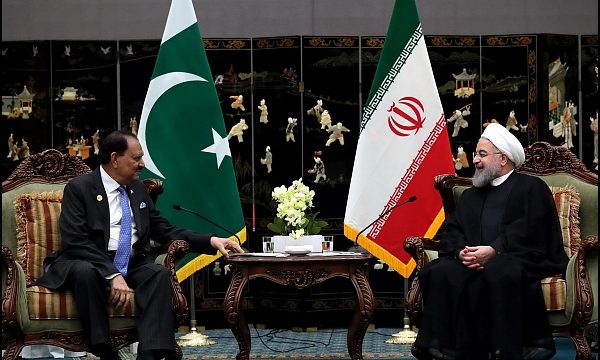 president.ir- President Rouhani expressed happiness over growing relations between Iran and Pakistan as two friend and brother countries and stressed that Tehran welcomes deepening relations with Islamabad in all fields of mutual interest.

Speaking in a meeting with President Mamnoon Hussain of Pakistan on Saturday, Dr Hassan Rouhani said: “Iran is ready to have mutual investment with Pakistan in various fields”.

Stressing better banking relations between the two countries, the President expressed happiness over Pakistan’s membership in SCO and said that Iran supports Islamabad’s effective role in the organisation.

Pakistan is an important country in the region, said Rouhani adding: “Iran can be a reliable source for supplying Pakistan’s energy”.

He also went on to refer to IAEA reports, saying: “Iran has lived up to its commitments under the Joint Comprehensive Plan of Action (JCPOA) and the unilateral actions of the US government in exiting the deal is against the norm of international relations and UNSC resolution, to which the global community should respond”.

The President of the Islamic Republic of Iran also expressed satisfaction over security in the common borders between the two countries and said: “We welcome defence cooperation between Iran and Pakistan and our common borders must always be secure borders for both countries”.

“Until the terrorists are active, the region will not achieve its development goals,” continued Rouhani adding: “Fighting terrorism requires full cooperation and coordination among all countries of the region”.

Dr Rouhani highlighted the importance of maintaining regional stability and security and emphasised: “We want to see a secure and stable Afghanistan, and the coordination of Iran, Pakistan and Afghanistan is very important for the security and development of the region”.

Describing the positions of Iran and Pakistan on the issues of the region and the World of Islam as very close, the President said: “At regional and international meetings, including the recent summit of the Organisation of Islamic Cooperation (OIC), Iran and Pakistan have had close stances in condemning the transfer of US embassy to the Holy Quds as well as the demonstrations in the two countries in support of Palestine on Quds Day”.

President Mamnoon Hussain of Pakistan also pointed out the deep cultural and historical co-existence of the two Iranian and Pakistani nations, emphasising that Pakistan, as a friend and neighbour country, will always stand with Iran, and that Islamabad is determined to develop relations in all fields of mutual interest.

“We need to work together and utilise all the capacities to further increase trade between the two countries by eliminating all barriers, including tariff barriers,” said the president of Pakistan.

He also reiterated the support of Pakistan for Iran’s full membership in the Shanghai Cooperation Organization, adding: “We praise Iran’s positive role as an observer member to the SCO, and we hope that Iran will join permanent members of this organization as soon as possible”.

Calling for a peaceful solution to the crises through negotiation, he said: “Pakistan supports the JCPOA and urges all parties to abide by it”.

The Pakistani president also praised regional cooperation between Iran and Pakistan, saying that peace and stability in Afghanistan is important for both neighbouring countries, adding: “Border cooperation between the two countries has been enhanced in recent years, and this trend must persist”.

Hassan Rouhani, Mamnoon Hussain, SCO summit June 9, 2018
No prospect for talks with US on new deal: Iran
A Look at Iranian Newspaper Front Pages on June 9