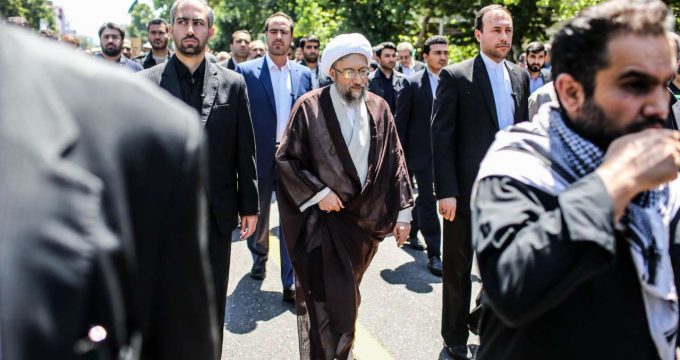 IRNA – The idea that moving embassy can boost the bases of a fabricated, child-killer regime is a wrong assumption, Iran’s Judiciary chief said on Friday.

‘Rallies on Quds Day end an important message to the domineering states, particularly the US and the Zionist regime, that assume that they can boost the bases of a fabricated, child-killer regime,’ Sadeq Amoli-Larijani said while participating in the Quds Day rally in Tehran.

The big turnout in rallies against their policies indicates that they have been wrong in their assumptions, he said.

They cannot achieve anything as far as the people are alert and vigilant, the Iranian official told reporters.

The Americans can only make some corrupt rulers in the region collaborate with them, but the Iranian nation will not give in its own rights and those of the Palestinian people, he said.

Imam Khomeini, the late founder of the Islamic Republic of Iran, on August 7, 1979, designated the last Friday of the holy month of Ramadan as the Quds Day and the day of Islam’s life.

To date, not only the Iranians, but also all the freedom-seekers of the world in many countries have marked the last Friday of Ramadan every year by holding demonstrations, to declare their solidarity with the Palestinians and support for their lawful rights.