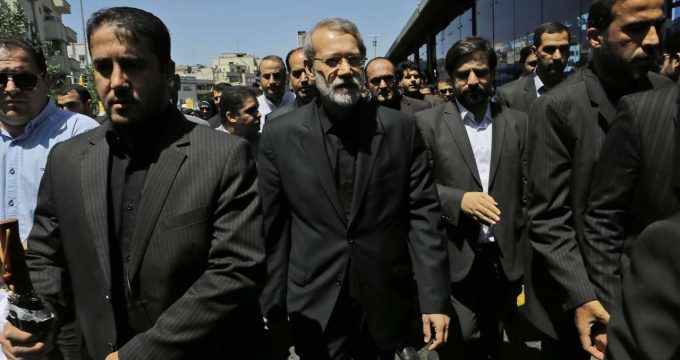 Reuters– The speaker of Iran’s parliament Ali Larijani said on Friday security in the Middle East could be threatened if Tehran was further pressured by Israel and Saudi Arabia.

Tens of thousands of Iranians took part in anti-Israel rallies to mark Iran’s annual day of solidarity with the Palestinians. They chanted “Death to Israel”, “Death to America” and burned Israeli and U.S. flags.

“Israel and Saudi Arabia are the source of chaos in the region. The malicious triangle of Saudi Arabia, Israel and America wants to turn the region into a chaotic scene,” state television showed Larijani telling demonstrators “The region’s security will be threatened if they corner Tehran.”

Israel and Saudi Arabia have backed President Donald Trump’s decision to pull the United States out of the 2015 multinational nuclear deal with Iran, under which Tehran agreed to curb its nuclear program in return for the lifting of most sanctions that crippled its economy.

Since Trump quit the pact last month, Washington has re-imposed sanctions on Iran and demanded that Tehran makes sweeping changes from dropping its uranium enrichment work to pulling out of the Syrian civil war.

Iran’s ultimate authority Supreme Leader Ayatollah Ali Khamenei said on Monday he had ordered preparations to increase uranium enrichment capacity if the nuclear agreement collapsed despite efforts by its European signatories to keep it alive.

Opposition to Israel, which Tehran refuses to recognize, has been a cornerstone of Iranian policy since its 1979 Islamic revolution. Shia Muslim Iran backs Palestinian and Lebanese militant groups which oppose peace with Israel.

“Israel is failing … the claim of creating a new regional order is a mistake they are making and it is an illusion … It is our responsibility to defend Palestinians,” Larijani told the crowd in Tehran.

Trump has pledged to work with Gulf Arab states and Israel to curb Iran’s regional influence. Larijani said Tehran had no intention of reining in its influence across the region.

“The occupying and aggressive Israeli regime can never feel that it is in a safe place,” Iranian President Hassan Rouhani said before departing for China for an economic and security summit, TV reported on Friday.

“I hope Palestinians will soon return to their homeland.”

Israel has refused any right of return for Palestinians who were expelled or fled and became refugees after the country declared independence in 1948, fearing it would lose its Jewish majority.

Iran has repeatedly called on its Sunni Muslim rival Saudi Arabia to help improve their strained relations and work for stability in the Middle East, where both nations have been involved in proxy wars for decades.

“Regional issues should be resolved by regional people, nations and the governments,” Larijani said.