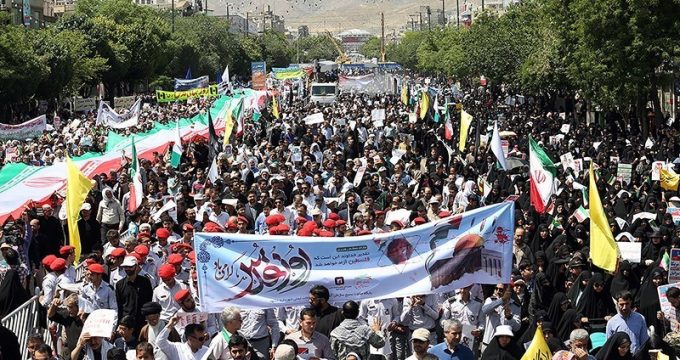 Tasnim – The Iranian people attending nationwide demonstrations on the International Quds Day reaffirmed their commitment to supporting the Palestinian people and vowed to make every effort to remove “the cancerous tumor of Israel”.

The participants in the nationwide demonstrations also emphasized that the “fake, child-killer, and occupying regime” of Israel will definitely collapse.

“We regard the liberation of the holy Quds and the freedom of the oppressed people of Palestine from the Zionist occupiers’ domination and the struggle for the elimination of the cancerous tumor of Israel, as the supreme cause of the Islamic Revolution and a decisive strategy of Imam Khomeini (RA)…,” the statement noted.

The declaration also condemned the US peace plan for Israeli-Palestinian conflict known as “the deal of the century” as a plot to continue the heinous crimes of Israel and violate the inalienable rights of the Palestinian people.

The only way to settle the issue of Palestine will be the return of all displaced Palestinians from around the world to their motherland and holding of a free referendum to decide the fate of their country, according to the statement.

The 9-article resolution has also condemned the US and Saudi governments for their support for the Israeli regime and hostile attitudes toward the Iranian nation.

Millions of fasting Iranian people from different walks of life poured into the streets on Friday to join the demonstrations in support of Palestinians, who have been suffering from Israel’s atrocities for decades.