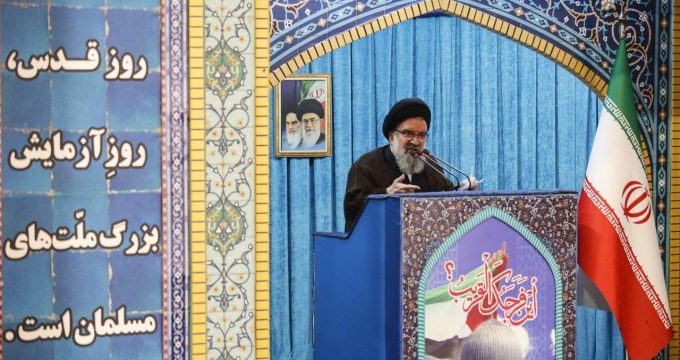 “Today’s rallies across Iran was not only against the Zionist regime, but also against the Americans who have been giving their unconditional support to Israel,” said Ayatollah Ahmad Khatami, the interim leader of Tehran Friday Prayers, today, which also marks the International Quds Day in support of the Palestinian cause.

“Today’s rallies were also in opposition of the compromising, reactionary states in the region,” he added, noting the ‘triangle of evil’ formed by the Israeli regime, US and Saudi Arabia against the Muslim world.

“The compromising, reactionary states in the region are racing with one another to be the first to recognize Israel,” Khatami said, adding “this race will lead to their downfall.”

Khatami stressed that Iran’s nuclear program does not have a military purpose, citing Islamic teachings that forbid the use of weapons of mass destruction.

He also censured the US and EU for attempting to impose a ‘distorted’ form of JCPOA on Iran that would curb the country’s nuclear activities and at the same time instate sanctions on the Islamic Republic.