JCPOA parties must guarantee Iran will be compensated after US exit: Zarif

Press TV- The Iranian foreign minister has written a letter to his counterparts on the unlawful withdrawal of the US from the 2015 nuclear deal, saying that for the accord to stay alive, the remaining signatories need to guarantee that Iran will be “unconditionally” compensated with the return of American sanctions.

Mohammad Javad Zarif published a copy of the letter on his Twitter account on Thursday, calling for action in the face of Washington’s “ever-expanding economic bullying,” which poses a threat to “not just the accord, but multilateralism and the rule of law.” 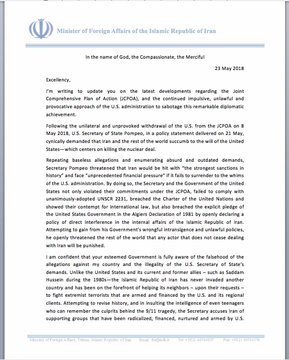 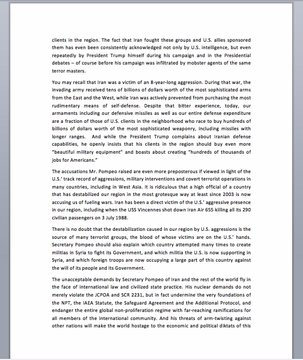 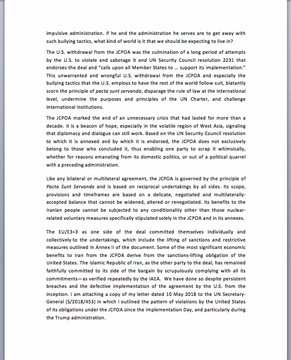 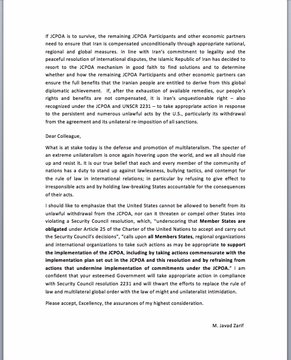 My letter to fellow foreign ministers on steps to take to address US’ unlawful withdrawal from JCPOA. Its ever-expanding economic bullying requires action to save not just the accord, but multilateralism and the rule of law.

The letter comes amid efforts by Tehran and its partners in the 2015 deal – France, Britain, Germany, Russia and China – to keep the agreement in place after US President Donald Trump announced last month that Washington was walking out and slapping the nuclear-related sanctions back on Iran.

The two sides are now seeking to devise a mechanism to both save the Joint Comprehensive Plan of Action (JCPOA) — as the deal is formally called —  and help protect the Iranian interests that could be hurt when US sanctions fully take effect in November.

Tehran has urged the other signatories, the Europeans in particular, to give assurances that Iran would still be able to fully benefit from the JCPOA without the US, which has already begun throwing a wrench in Europe’s business deals with Iran.

Zarif wrote, “If JCPOA is to survive, the remaining JCPOA Participants and other economic partners need to ensure that Iran is compensated unconditionally through appropriate national, regional and global measures.”

“In line with Iran’s commitment to legality and the peaceful resolution of international disputes, the Islamic Republic of Iran has decided to resort to the JCPOA mechanism in good faith to find solutions and to determine whether and how the remaining JCPOA Participants and other economic partners can ensure the full benefits that the Iranian people are entitled to derive from this global diplomatic achievement,” he added.

Zarif further said the very terms of the JCPOA and UN Security Council Resolution 2231 – which endorsed the agreement—gives Tehran the “unquestionable” right to take “proper action” in the face of “numerous unlawful acts by the U.S., particularly its withdrawal from the agreement and its unilateral re-imposition of all sanctions.”

“I should like to emphasize that the United States cannot be allowed to benefit from its unlawful withdrawal from the JCPOA, nor can it threaten or compel other States into violating a Security Council resolution,” the Iranian foreign minister pointed out.

In a speech earlier this week, Leader of the Islamic Revolution Ayatollah Khamenei once again warned the Europeans against standing idly in the face of US pressure on Iran, saying European governments cannot expect the “Iranian nation to both put up with sanctions and give up its nuclear activities and continue to observe limitations.”

The Leader also ordered Iran’s national nuclear agency to prepare the ground for boosting the country’s nuclear enrichment capacity while respecting the JCPOA.

The Europeans have already taken a number of measures to protect their businesses in Iran. They wrote a letter on Wednesday to the US, calling on Washington not to go ahead with its planned “secondary sanctions” against European firms active in the Iranian market.

Elsewhere in the letter, Zarif blasted a policy statement delivered on 21 May by US Secretary of State Pompeo, in which he repeated a series of unfounded allegations against Iran and threatened the country with the “strongest sanctions in history” if it failed to fulfill Washington’s 12-point list of demands.

“I am confident that your esteemed Government is fully aware of the falsehood of the allegations against my country and the illegality of the US Secretary of State’s demands,” Zarif wrote.

Zarif further said that Pompeo “openly threatened the rest of the world that any actor that does not cease dealing with Iran will be punished.”

“Unlike the United States and its current and former allies – such as Saddam Hussein during the 1980s—the Islamic Republic of Iran has never invaded another country and has been on the forefront of helping its neighbors – upon their requests – to fight extremist terrorists that are armed and financed by the US and its regional clients,” he added.