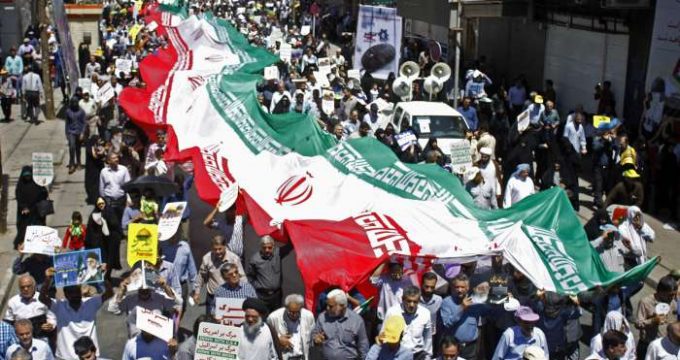 IRNA – Iran’s Defense Ministry described the International Quds Day as the ‘resurrection of anti-Zionism unity’, adding that the wise turnout of Iranian people in the pro-Palestine demonstrations will nullify the satanic plots of the Zionist regime.

‘The Zionist regime as the cancerous tumor in the region greedily has occupied the Muslim country of Palestine for more than half a century, and it is killing women, children and innocent people in retaliation for their insistence on their rights, while plotting for destruction of the Muslim world, and for dominance over the region and the Muslim countries,’ the statement read.

‘No doubt the continuation of the organized occupation of Palestine territories and the terrorist acts of the regime, as well as the unwise, illegal decision of the US government in recognizing the city of Quds as the capital of the Zionist regime and moving its embassy to the city, will boost the will and resolution of the oppressed Palestinian people in confronting and resisting the occupation,’ it said.

The measures, ‘will certainly escalate the anti-Zionist/US move in the region and the world, and will promote resistance in the occupied territories,’ the statement added.

Imam Khomeini, the late founder of the Islamic Republic of Iran, on August 7, 1979, designate the last Friday of the holy month of Ramadan as the Quds Day and the day of Islam’s life.

To date, not only the Iranians, but also all the freedom-seekers of the world in many countries have marked the last Friday of Ramadan every year by holding demonstrations, to declare their solidarity with the Palestinians and support for their lawful rights.

Calling on the Arab youth in the region, he said that participation in the rallies and defending the Palestinians, are important steps toward making the future better.