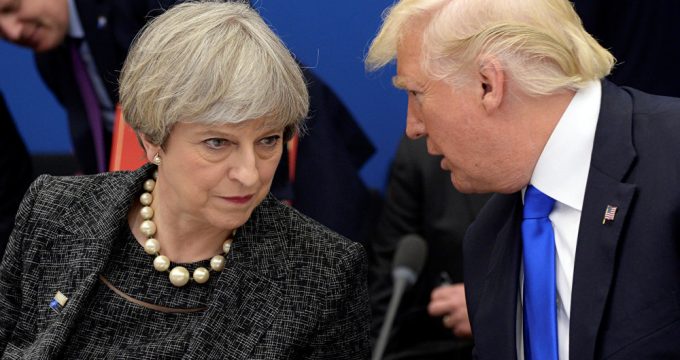 Sputnik– US President Donald Trump and British Prime Minister Theresa May in a phone call on Monday talked about putting together a new Iran nuclear deal, as well as rebalancing trade between the United States and Europe, the White House said in a press release.

“President Trump also called for a new and comprehensive deal that addresses all aspects of Iran’s destabilizing behavior, including in Yemen and Syria,” the release said. “The President further underscored the need to rebalance trade with Europe.”

At the same time, discussing the tariffs issue, Theresa May called this move “unjustified.”

“The Prime Minister raised the US decision to apply tariffs to EU steel and aluminum imports, which she said was unjustified and deeply disappointing… They agreed to discuss this and wider issues of free and fair global trade further at the G7 summit later in the week,” the UK press service said.

The UK prime minister also underlined the need to safeguard jobs “that would potentially be affected by the decision.”

On Thursday, Washington announced it would impose a 25-percent steel tariff and a 10-percent aluminum tariff on the European Union, Canada, and Mexico, effective June 1. The move came after months of talks on possible limits.

The United States initially introduced its metal tariffs in March. However, a number of countries, including Canada, Mexico and those in the European Union, were granted temporary exemptions first until May 1 and then for one more month until June 1.

Despite the imposition of tariffs, the White House said on Thursday that the US administration would continue to discuss the steel and aluminum duties with the European Union, Mexico and Canada.

#IranDeal, Donald Trump, Theresa May, US withdrawal from JCPOA June 5, 2018
Iran begins working on infrastructure to build advanced centrifuges
Caught in the Cross-Fire: US, Iran give EU two ultimatums