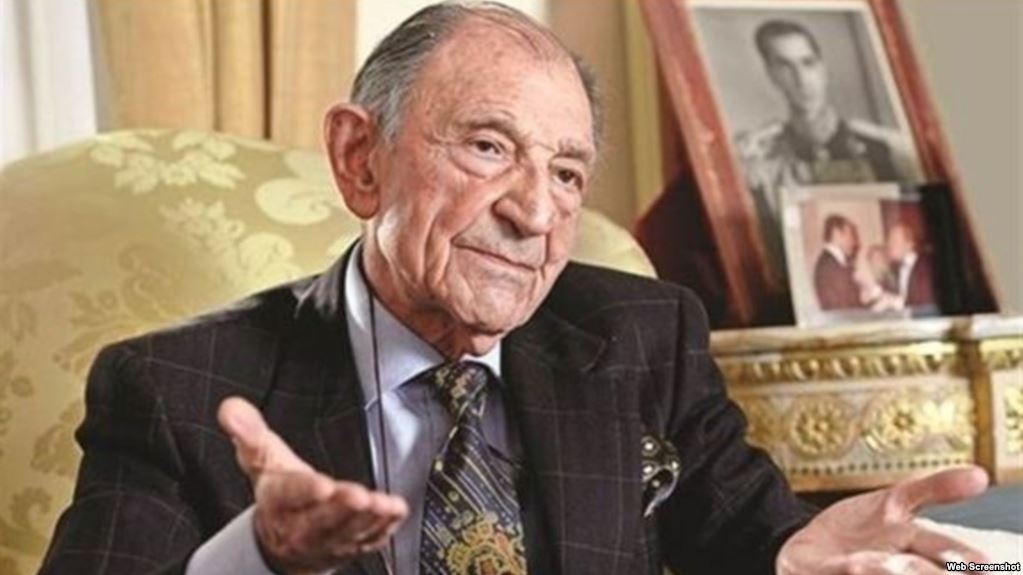 RFE/RL’s Radio Farda– The tough U.S. line on Iran and speculation that Washington is pursuing regime change in Tehran have prompted a shah-era foreign minister to warn from Swiss exile against “turning [Iran] into a mess,” citing the example of neighboring Iraq.

Eighty-nine-year-old Ardeshir Zahedi, a former Iranian ambassador to the United States, was following up on a New York Times piece last week in which he challenged U.S. Secretary of State Mike Pompeo’s recent list of a dozen “simple requirements” of the Iranian regime as “beVwildering and saddening.”

Pompeo’s list came on the heels of the U.S. abrogation of the Iranian nuclear deal, and included moves ranging from coming clean on its previous covert nuclear activities, to ceasing missile development, withdrawing forces from Syria, and ending its support for “terrorist” groups like Hizballah or Hamas or the Taliban in Afghanistan, as well as Huthi rebels in Yemen.

“I don’t want another Iraq to be created,” Zahedi told RFE/RL’s Radio Farda, suggesting that Iraq — where U.S. forces led an international coalition that deposed Saddam Hussein — had turned “into a mess.”

Pompeo had vowed in his speech to destroy Iran’s economy and “crush” its operatives and proxies around the world, with some interpreting the message as return to the goal of regime change — although Pompeo and other U.S. officials have said Washington is merely trying to change Tehran’s behavior.

“As the head of foreign policy and of a great power, and previously as the director of the CIA, he should be better informed about Iran, its people, and its history,” Zahedi’s letter in The New York Times said.

U.S. President Donald Trump entered office pledging to scrap the 2015 nuclear deal between Iran and six world powers, which traded a curb on atomic activities for international sanctions relief. He has called it a bad deal and cited Tehran’s alleged support for terrorist groups, meddling in regional conflicts, ballistic and other missile efforts, and rights violations.

“Bullying rarely succeeds and has never succeeded against the nation of Iran,” Zahedi wrote, adding that Iran “has never stooped and bowed to foreigners and has always remained united in the face of adversity.”

Is ‘Regime Change’ Back?

The so-called Joint Comprehensive Plan of Action (JCPOA) signed by the United States and Iran, plus China, France, Germany, the European Union, and Russia, was seen as a major step toward allowing Tehran back into the international diplomatic and trade arena.

Polls in Iran are largely unreliable, but Tehran has long asserted that the issue of a peaceful nuclear program has popular support and therefore unites Iranians of various political persuasions.

But the International Atomic Energy Agency (IAEA) and Western governments warn that Iranian officials have lied in the past about nuclear activities — including Tehran’s conduct of a covert, military atomic program in the past.

Israeli Prime Minister Benjamin Netanyahu is currently on a European tour in which he is trying to persuade German, French, and British leaders to follow Trump’s abandonment of the nuclear deal.

Pompeo, in his remarks last month, warned, “I’d remind the leadership in Iran what President Trump said: If they restart their nuclear program, it will mean bigger problems — bigger problems than they’d ever had before.”

Zahedi said Pompeo, or indeed the United States, “does not have the right to threaten to crush my country,” and added, “If from outside someone wants to return and [push for regime change] –and the money doesn’t come from Arab countries, Israel, and the CIA — if that individual has a plan, he should announce it to the people.”

‘My Blood, My Everything’

Some have called the former diplomat a “patriot” defending Iran’s national interest, while others blasted him as a “traitor” whose judgment has been clouded by his old age.

“I have nothing to do with the [Iranian] establishment,” Zahedi told RFE/RL in response to whether his public stance was lending support to the clerical establishment that emerged in Iran after a religiously fueled revolution ousted the U.S.-backed shah in 1979.

“My blood, my life, my everything is Iran,” he said. He said he considered Iran’s 82 million or so people to be “my sisters and brothers” and said he couldn’t sit idly by “while they’re being subjected to injustice.”

Another former Iranian president, Abol Hassan Bani Sadr, who fled Iran in 1981 after his dismissal, claimed recently in an interview with The Washington Post that “new sanctions and the threat of war will only help the Iranian regime to solidify itself.”

Pompeo pledged that U.S. efforts would be aimed at “advocat[ing] tirelessly for the Iranian people,” adding: “The regime must improve how it treats its citizens. It must protect the human rights of every Iranian. It must cease wasting Iran’s wealth abroad.”

Pompeo, who previously headed the CIA, cited recent protests in Iran as evidence that “the Iranian people are deeply frustrated with their own government’s failures.”

Iraq remains mired in deep political divisions and security woes 15 years after the U.S.-led coalition unseated Saddam Hussein, and is currently emerging from a three-year war to defeat Islamic State (IS) militants.