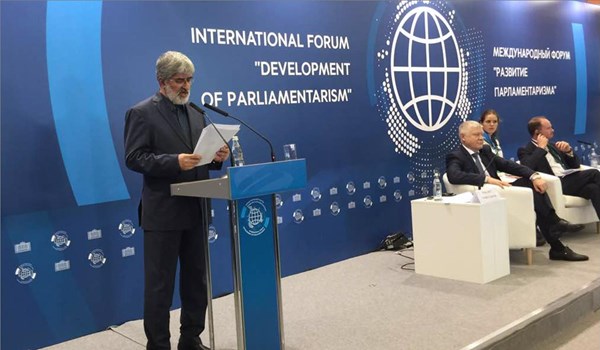 FNA- Iranian Parliament Vice Speaker Ali Motahari blasted the US exit from the Joint Comprehensive Plan of Action (JCPOA) as a move destabilizing the world security.

“Violating international agreements and treaties based on poor reasoning and unrealistic excuses have flared up insecurity in the world,” Motahari said on Tuesday, addressing the Development of Parliamentarism International Forum in Moscow.

He reiterated that such double-standards and profit-oriented behaviors have cast shadow over all relations at different levels and in diverse areas.

“They have also bolstered hate speech, and turned into an element of threat for international peace and security,” Motahari added.

He underlined that the US unilateral withdrawal from the nuclear agreement of July 14, 2015, was a blatant example of inequality in the world, and said, “This is while the International Atomic Energy Agency has confirmed Iran’s abidance by the agreement for many times.”

On Monday, Ayatollah Khamenei once again reiterated that Tehran would never take part in any negotiations over its missile and regional power, and warned that Europeans should comply with his earlier stated conditions or Iran would discard the nuclear deal.

Addressing thousands of Iranian people and officials at a ceremony at the Mausoleum of the late founder of the Islamic Republic, Imam Khomeini, in Southern Tehran on Monday, the Iranian Leader said the EU should avoid miscalculations that Iran would continue fulfilling its undertakings under the Joint Comprehensive Plan of Action if the European states do not stand against the US sanctions in practice.

“The words uttered by some European states indicate that they expect the Iranian nation to both agree to comply with the nuclear deal undertakings and live under sanction. I tell the European states that have undigested thoughts in their minds that this dream of yours will not come true,” Ayatollah Khamenei said.

“The Iranian nation will not tolerate to be under both sanctions and nuclear restrictions,” he reiterated.

Ayatollah Khamenei further dismissed the US-led moves to cause misperception among Iranians that discarding the nuclear deal would end in war, saying some wrongly mention that Iran’s opposition to continued compliance with “an impaired version of the JCPOA would result in war, but this is a lie,” and a part of the enemies’ psychological war against Iran.

He said Tehran would never agree to negotiate over its power components, specially its missile and regional power, and warned that Iran has developed such a robust missile power that it would retaliate any enemy strike with ten-fold missile attacks.

The Leader further warned the EU to avoid playing with Iran over the nuclear deal, and ordered the country’s nuclear officials to take the needed measures to be completely prepared for any decision by the Islamic Republic.

“The Atomic Energy Organization of Iran is duty-bound to prepare the ground for achieving 190 thousand of SWUs (Separative Working Units of uranium enrichment), but within the framework of the JCPOA for the time being,” he said in warning remarks, implying that if the EU proves disloyalty to its undertakings Tehran will resume nuclear fuel operations to maximum levels that it needs to fuel its power plants.

“The Atomic Energy Organization of Iran should also take the introductory measures for the execution of the President’s order from tomorrow,” the Iranian Leader added.

His remarks came as Iran and the EU are in talks on how to preserve the nuclear deal after the US discarded the agreement in a blatant violation of its endorsed undertakings and despite international warnings and as time is clicking for the Europeans to declare their final decision on how they intend to ensure Iran of their compliance with their duties under the nuclear deal.

Almost two weeks later, the Iranian Supreme Leader declared five prerequisites for the EU to keep Tehran under the nuclear deal, underlining that the three European nations are necessitated to prove their trustworthiness after their disloyalty to a similar deal in 2005.

Addressing a meeting with former and present Iranian officials here in Tehran on May 24, the Iranian Leader reminded defiance of undertakings by Britain, France and Germany back in 2005 when Iran embarked on a voluntary implementation of the additional protocol to the NPT and halted nuclear activities, and said the European trio “showed a major disloyalty; they made a promise in 2004-2005, but defied. Now they should prove that today they won’t show the dishonesty and disloyalty of that day”.

Ayatollah Khamenei asked officials not to repeat a single mistake twice, and cautioned, “Europe has displayed that it accompanies the US in most sensitive cases.”

He further blasted the Europeans for keeping mum about the US frequent violations of the 2015 nuclear deal in the last two years, and said “the EU is required to make up for this silence”.

Ayatollah Khamenei reminded that the US has violated UN Security Council Resolution 2231 that accompanies the nuclear deal, and said hence “Europe should issue a resolution against the US violation” of the agreement.

He said “the EU should also undertake to avoid a discussion of Iran’s missile and regional power”.

The Iranian Leader reminded that the nuclear talks were aimed at the removal of the sanctions, “many of which were not lifted, while they have been recently threatening to revive the sanctions despite the emphasis of the UN Security Council resolution” to the otherwise.

The Leader further underlined that the EU should also pledge “to take action against any kind of sanction against the Islamic Republic and stand against the US sanctions on the basis of a clear-cut position”.

“Europe is also needed to ensure Iran’s full crude sales,” he said, and explained, “In case the Americans manage to strike a blow at our oil sales, (we) should be able to sell whatever volume of oil that we want. The Europeans should compensate (for the loss in crude sales) in a guaranteed manner and buy Iran’s crude.”

Ayatollah Khamenei also underscored that the EU banks should also ensure trade with Iran, and said, “We don’t want a fight with these three countries, but (we) don’t trust them either because of their past record.”

He further warned that “if Europeans delay in complying with our demands, then Iran would preserve its right for resuming nuclear activities”. “Once we observe that the JCPOA (Joint Comprehensive Plan of Action) produces no fruit, then one way would be reviving the operations that have been shut down.”

Also, Secretary of Iran’s Supreme National Security Council (SNSC) Ali Shamkhani underlined last week that his country would never renegotiate the 2015 nuclear deal, adding that Tehran would revise cooperation with the Europeans if they failed to defend the interests of both sides.

Pompeo gave a speech at the Heritage Foundation in Washington: “After the Deal: A New Iran Strategy.” Over 26 minutes, Pompeo articulated a strategy that can best be summarized as, “Do everything we say, or we will crush you”, days after the US withdrawal from the 2015 nuclear deal.

Meantime, Shamkhani described the negotiations between Iran and the European states on implementation of the nuclear deal after the US withdrawal as a test for Europe to prove their independence against the US dictated policies, and said if they cannot or do not want to defend their and the Islamic Republic’s interests against the illegal and irrational approaches of Trump then “continued cooperation with them is useless”.

He referred to the US officials’ allegations against Iran’s peaceful nuclear activities, and said Washington which has used atomic bombs against the Japanese people and has equipped the child-killer Israeli regime with such weapons, is not competent to opine on Iran’s nuclear program.

Also, Head of the Atomic Energy Organization of Iran (AEOI) Ali Akbar Salehi said last week that Tehran is capable of and prepared to increase the amount and level of its uranium enrichment.

“We have done the needed preparations in different fields to return to the pre-nuclear deal era, but we hope never to reach that point,” Salehi told reporters.

“If we decide to develop certain operations, including enrichment, we will be ready to increase production or (level of) enrichment, for instance,” he added.