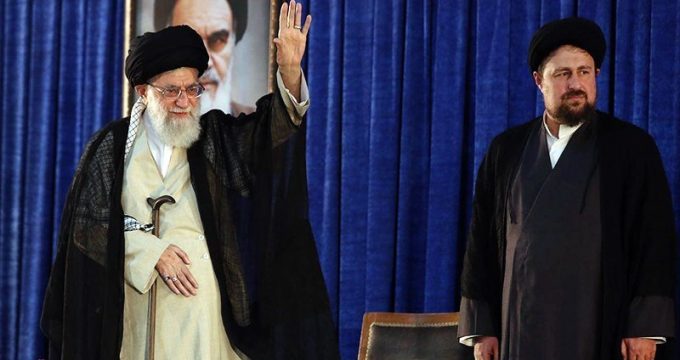 Visitors from across Iran, as well as high-ranking Iranian officials along with groups of foreign guests and ambassadors, has taken part in the commemoration ceremony to pay tribute to “the architect of the Islamic Revolution.”

Addressing the gathering, Ayatollah Khamenei ordered the Atomic Energy Organization of Iran (AEOI) to make preparations for enrichment of uranium up to a level of 190,000SWU without any delay.

“It seems from what they say that some European governments expect the Iranian nation to both put up with sanctions and give up its nuclear activities and continue to observe limitations [on its nuclear program]. I tell those governments that this bad dream will never come true,” the Leader said.

Iranian President Hassan Rouhani and Seyed Hassan Khomeini – grandson of Imam Khomeini and trusteeship of his shrine – canceled speeches to the event due to lack of time.

Meanwhile several well-known foreign figures including Head of the Iraqi National Alliance Seyyed Ammar al-Hakim and American writer Robert Fantia hailed the character of the late Imam Khomeini adding that he has left drastic impact on the spirit of the Muslim youth worldwide against tyrannical and arrogant powers.

Al-Hakim said that the world oppressed nations will continue the path of the late Imam Khomeini.

Also, Fantia referred to the power of unity as the most important legacy of the late Imam Khomeini.

More than 300 foreign correspondents were covering the event slated to be wrapped up on June 5.

Imam Khomeini passed away aged 86 at the night of June 3, 1989. Hailed as one of the most influential figures in modern history, he led popular protests against Iran’s former Pahlavi regime which was a key ally of the United States.

Imam Khomeini spent many years in exile in Iraq, Turkey and France, from where he led a swelling grassroots movement which ultimately put an end to millennia of monarchical rule in Iran.