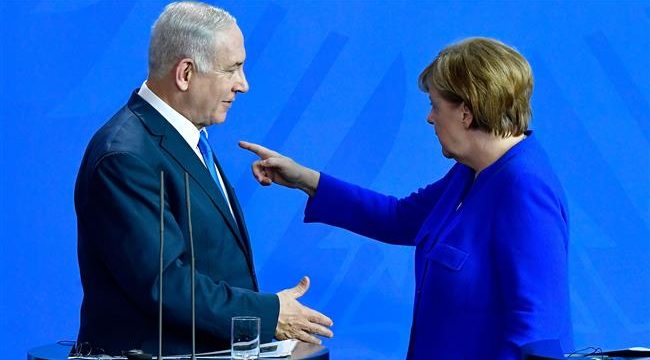 Press TV- German Chancellor Angela Merkel has once again defended the Iran nuclear deal in talks with Israeli Prime Minister Benjamin Netanyahu, who is in Europe to persuade its leaders to follow the US and quit the multilateral accord.

“There’s not agreement on every issue,” Merkel said on Monday after meeting with Netanyahu in Berlin, the first destination in Netanyahu’s tour that will also take him to France and the UK.

Germany and Israel, she said, agree on the need to prevent a “nuclear-armed” Iran, but have different views on the way to achieve that end.

US President Donald Trump pulled Washington out of the accord last month, despite stern international warnings from the other signatories, which consider it to be pivotal to regional and international peace and security.

Netanyahu, who has been vilifying the JCPOA since its conclusion in 2015, cranked up his rhetoric against the deal after Trump’s move.

Contrary to the US and Israel, Europe insists the 2015 agreement works and Iran has respected it as repeatedly confirmed by the International Atomic Energy Agency (IAEA).

In a news conference with Merkel, the Israeli premier said the Agency has to look deeper into Iran’s nuclear work based on “a lot of new information that Israel has now provided the IAEA.”

Standing in front of a large screen, the prime minister claimed that “Iran is brazenly lying” about its nuclear activities. He presented 55,000 pages of documents and 55,000 files on CDs as alleged evidence, without proceeding to reveal any contents.

Before embarking on his European tour, Netanyahu would be top on the agenda of his talks.