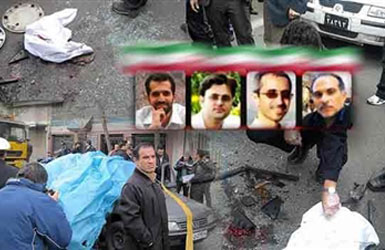 The National Interest | Sebastien Roblin: Approaching eight o’clock on the morning of January 12, 2010 Professor Massoud Alimohammadi walked to his car parked next to his house in North Tehran, passing a small motorbike on the side of the road. The fifty-one-year-old elementary particle physicist was a leading Iranian theorist on quantum-field states, and known to his friends as a political moderate.

As the professor’s open his car door, the person who had been observing him pressed a button on a remote control. The bike suddenly exploded with such force that all the windows on Masoud’s four-story apartment building were shattered. Massoud was killed instantly, and two nearby bystanders injured. The triggerman, ostensibly a man named Arash Kerhadkish, strolled over to a car waiting nearby and was driven away.

Initially, some speculated that Iranian hardliners sanctioned the killing of a reformist professor. However, anonymous Iranian and Western intelligence sources eventually told a different story: the professor was an important figure in a nuclear-research program run by the Iranian Revolutionary Guard.

Nine months later, on the morning of November 29, a quantum physicist named Majid Shahriari was driving through Tehran with his wife, Dr. Bejhat Ghasemi, in the passenger seat when several motorbikes road up beside him near Artesh Boulevard. While one rider hemmed in Shahriari’s car, another rider (believed to be Arash Kerhadkish), attached a package of C4 explosive to the door beside Shahriari, then drove back and triggered a detonator. The explosion killed Shahriari, injured his wife and colleague, and even knocked over one of the motorbike-mounted hitmen, wounding the hitman.

At nearly the same time, another motorbike assassin rammed the car of Sharhiari’s colleague, Professor Fereydoon Abassi, a prominent leader of Iran’s nuclear-research program as he awaited Sharhiari for an appointment at Shahid Beheshti University. He and his wife jumped out of the car just before the bike exploded, seriously injuring Abassi in the face and the hand.

Eight months later on July 23, 2011, Darioush Rezaeinejad and his wife drove to pick up their daughter Armita up from kindergarten. At 4 p.m., the thirty-five-year-old postgrad in electrical engineering deposited his wife and child on the curb and was returning to his vehicle to park the car when two bearded motorcyclists pulled up next him and opened fire with nine-millimeter pistols. Rezaeinejad was shot five times in the arm, neck and chest. His wife, Shoreh Pirani, attempted to pursue the attackers, but they shot her too. The engineer died shortly after being hospitalized at Resalat Hospital. Shoreh recovered, and later told an interviewer that her five-year-old daughter continued to draw pictures of the moment of her father’s death.

Darioush’s wife would also state in a later interview that the engineer had been a member of the Iranian nuclear program and had received anonymous threats prior to his death. Tehran blamed the United States and Israel for the killing. The United States denied the charge, while Israeli government social-media accounts suggestively expressed that it did not condemn the killings, whoever might have perpetrated them.

Six months later on January 11, 2012—nearly the anniversary of Alimohammadi’s killing—Mostafa Ahmadi Roshan, an expert on uranium enrichment, was the next to fall victim while driving to work through Eastern Tehran in his Peugeot 405. Deputy director of the Natanz facility, he had been photographed with Mohamed Ahmadinejad, who was president at the time. Supposedly, he was tailed by multiple assassins, including the ubiquitous Kerhadkish. One of those assassins attached a magnetic mine to Roshan’s car, which detonated and killed him, but spared the life of his wife, who was sitting beside him.

Iranian counter-intelligence operatives in the Ministry Of Intelligence and Surveillance apparently were at work, however. In 2011, reportedly thanks to a tip from a third country, MOIS picked up a twenty-four-year old aspiring kick-boxer named Majid Jamali Fashi, who claimed to have dropped of the explosive motorbike that killed Alimohammadi. Fashi confessed on public television to receiving training and a payment of $120,000 from Mossad (Institute), the Israeli spy agency connected to dozens of assassinations over the years, includingGerman rocket scientists, Olympic terrorist plotters, and the Canadian Gerald Bull, developer of the of the Iraqi Project Babylon “super gun.”

In May 2012, Fashi was hung—and Tehran announced it had captured eight male and six female Iranian nationals involved in the killings. Iranian media subsequently aired a half-hour documentary dramatizing their confessions. The nationals were reportedly drawn from sympathizers or members of the MEK (Mujahedin of Iran), a violent opposition group to the government Tehran. In this account, the agents had received forty-five days of training in Israel, and then operated in multi-cell teams that had meticulously spied on their victims to determine their routines and then executed the hits based on instructions from Israeli handlers.

Iranian security forces are infamous for using torture, sexual assault, and threats to relatives and to compel false public confessions of guilt. However, anonymous sources in Israeli intelligence and American diplomatic circles conveyed to media that Israel really was behind the assassination campaign that Fashi at least had given a generally true confession, and that Israel really was training MEK members to serve as operatives in Iran.

In 2014, a journalist revealed that Washington had pressured Israel to cease the assassinations, which had threatened to derail attempts to negotiate a nuclear agreement with Tehran. Earlier, president Bush was reportedly angered to learn that Israelis posing as CIA agents had recruit Iranian nationals in Pakistan for its sabotage and assassination campaign in Iran.

Of course, both public Iranian and anonymous Israeli accounts may be calculated and less than reliable. It seems possible, for example, that the Iranian nationals implicated in the assassination may have been working besides un-apprehended Israeli operatives from Kidon (Hebrew for “Tip of the Spear”) an elite assassination unit within Mossad. According to some accounts, the attacks may also have stopped because additional killings would have posed too great a risk, and remaining targets were too well guarded.

There are also a few ambiguous cases to consider. Earlier on January 15, 2007, Iranian scientist Ardeshir Hosseinpour died mysteriously in Isfahan due to a “gas poisoning” incident. The journals Stratfor and Haaretz claimed Hosseinpour’s death was the work of Mossad, while the Iranian government and sources in Mossad denied involvement. Years later, Hosseinpour’s sister claimed instead that the professor had been killed by the Revolutionary Guard for refusing to work with the nuclear program. In 2015, Iranian security claimed it had foiled another Mossad hit. Israeli sources don’t appear to have stepped forth to corroborate either claim.

In 2018, an article by Ronen Bergman in Politico sketched out the longer history of the Israeli assassination campaign, identifying it as the “fifth prong” of a four-part strategy devised in 2003 by Tamir Pardo, then serving as deputy head of Mossad under Meir Dagan. The concept was to pressure Iran into abandoning its nuclear program using economic sanctions, diplomatic pressure, support for Iranian minorities and opposition groups, and interdiction of key nuclear technologies. Though the wider campaign involved close cooperation with the U.S., which famously collaborated to develop the Stuxnet computer virus responsible for destroying hundreds of Iranian centrifuges, Israel alone was involved in plotting assassinations, which the CIA claims it was unwilling to become involved in and preferred not to be aware of. (Bergman also gives an alternate versions of Rezaeinejad’s killing, claiming he was tailed by a lone motorcyclist, and shot while approaching the fortified Imam Ali facility.)

Bergman alleges that the campaign was effective in terrorizing Iranian scientists into avoiding or disassociating with Tehran’s nuclear program, and caused Iran to institute expensive and highly time-consuming security measures to protect its scientists and attempt to root out traitors and bugs. In his account, Dagan saw the assassinations as potentially heading off a push by Israeli Prime Minister Benjamin Nethanyahu to directly attack Iranian nuclear sites from the air, a course of action he saw as disastrous.

The Mossad campaign did, however, cause the Iranian Revolutionary Guard to plot a series of retaliatory terrorist attacks across the world using its Unit 400 cover operations branch. Hastily and ineptly planned, all but one of the roughly twenty Iranian plots failed, often in spectacular fashion. The campaign’s only “success” was the killing of five Israeli tourists and a local driver on July 18, 2012, in a suicide bombing executed by Hezbollah at the Burgas airport in Bulgaria.

The Mossad assassination campaign did not continue after 2012, though both U.S. and Israeli intelligence sources allege it was effective in slowing the progress of the Iranian nuclear program. While assassination was disavowed by U.S. diplomatic and intelligence officials, some politicians have voiced their support for the scientist killings. After all, the reasoning goes, such targeted assassinations kill far fewer bystanders than would missiles launched in a wider military conflict.

However, it’s hard to deny that the campaign used tactics that would be labelled “terrorism” or “murder” in the West were they waged against Israeli or American scientists engaged in weapons research. It seems assassinations are condemned or praised not according to the methods used but depending on who is performing them. It remains to be seen whether the U.S. withdrawal from the Iranian nuclear deal, which can already be linked to an escalating proxy war in Syria, may also see a resumption of the shadowy covert war between Israel and Iran.

Sébastien Roblin holds a master’s degree in conflict resolution from Georgetown University and served as a university instructor for the Peace Corps in China. He has also worked in education, editing and refugee resettlement in France and the United States. He currently writes on security and military history for War Is Boring.