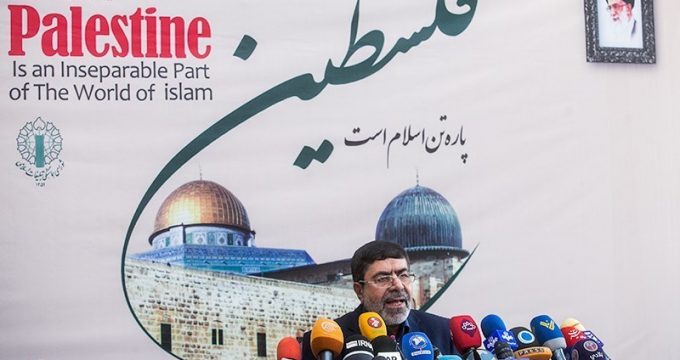 Quds Day rallies to be held in 900 Iranian cities

Tasnim – Countrywide demonstrations marking the International Quds Day will be held in more than 900 cities of Iran on the last Friday of the holy month of Ramadan with thousands of reporters scheduled to cover the event, an official announced Saturday.

Speaking at a press conference in Tehran, head of the Intifada (Uprising) and Quds Center at Iran’s Islamic Propagation Coordination Council, General Ramezan Sharif, said this year’s Quds Day rallies will be held in more than 900 Iranian cities and in major parts of the Muslim territories under the slogan “The International Quds Day, victory for the Resistance Front, defeat of American-Zionist sedition, and the Palestinian nation’s will to return” home.

More than 5,300 reporters are going to cover the nationwide demonstrations, including 160 foreign journalists, he added.

The event will begin at 10:30 am on Friday, June 8, across Iran, while 45 speakers will talk about the situation of Palestine in provincial capitals, Sharif explained, noting that Parliament Speaker Ali Larijani will be the keynote speaker in Tehran rallies.

He also predicted that this year’s demonstrations would be larger than the past given the US move to relocate its Israel embassy from Tel Aviv to al-Quds (Jerusalem), the defeat of Daesh (ISIL) and other terrorist group created by the US, Zionists and their regional allies, as well as the Palestinian people’s move to hold ‘march of return’ rallies in the past 10 Fridays that has resulted in the martyrdom and injury of around 2,000 Palestinians.

Another distinguishing feature of this year’s Quds Day rallies is that the Zionist regime of Israel’s positions have been targeted from the Golan Heights for the first time in the past 70 years, he added.

The IRGC general finally made a distinction between “people of Hejaz and the 150-strong clan of Al Saud” that rules Saudi Arabia, stressing that residents of Hejaz will definitely treat Israel as an enemy if they are liberated from the yoke of Al Saud.