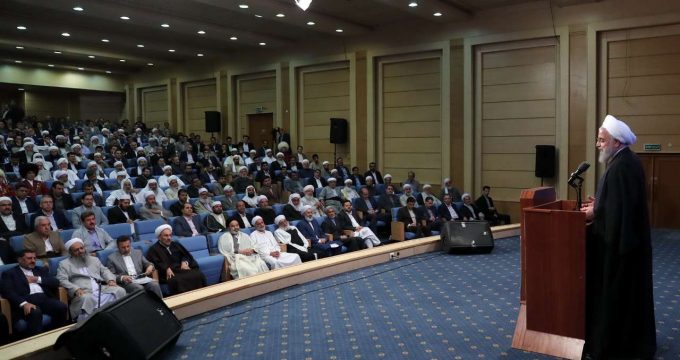 MNA – President Rouhani described all ethnic and religious groups of the country as having different roles in a great, single nation named the Islamic Iran, adding “I have no doubt that we will overcome the new situation well and we will achieve our goals if we consider ourselves members of a single community and nation.”

President Rouhani made the remarks in a cordial meeting with Sunni clerics and intellectuals on Saturday.

Stating that, “the yardstick for the right is God’s verses and the Imams (AS),” he added “nobody is superior to anybody else, except in how much they devote belief and piety.”

“Even in relation to non-Muslims who believe in the oneness of God, He orders understanding, unity and living together,” added Rouhani.

He also went on to say “we will achieve our goals if we consider ourselves members of a single community and nation.”

“Under the Islamic Revolution, we achieved freedom and elections,” added Rouhani, saying “the Revolution eliminated prejudice and brought people closer to each other.”

He also went on to say “many of the complaints and concerns of the young, women and ethnic and religious groups are right and the government is fully determined to address them.”

Stating that in today’s special conditions, “our brotherhood and integrity must be more prominent,” Rouhani added “we all see how the people of Palestine and the Muslim peoples of the region are being treated and people in some countries are faced with terrorist groups. We all see how they are putting pressure on the Iranian people.”

Rouhani also went on to say “of course, we are happy that what the Americans did recently against Iran was for the first time objected by the global community, except for a few small countries and this is a great victory for the Iranian nation.”

“We were loyal to our commitments and proved the other side is unfaithful,” he added. “Today, Americans have no pretext to put pressure on Iran.”

President Rouhani also said “the US taking a draft resolution to UNSC against Palestine and Gaza and failing in it with only one vote in favor is a great victory for the people of Palestine, Muslims and the region.”