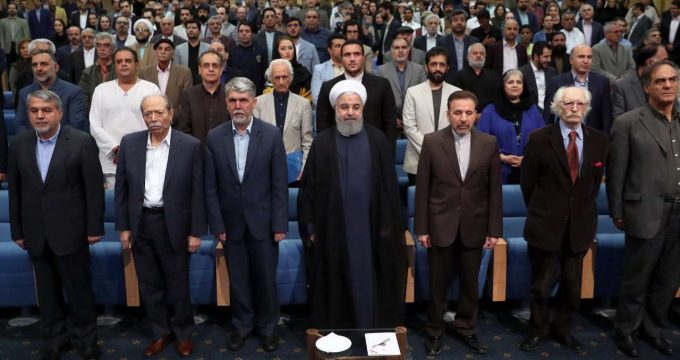 Power of culture, language of art lead to public victory

IRNA – President Hassan Rouhani said on Wednesday that using power of culture, language of art and unison will pave the way for public victory.

Addressing a gathering of artists and men of culture, he added that men of arts and culture have righteous complaints and shortcomings should be addressed in cooperation with each other.

Contending that the biggest lesson of Ramadan is patience, peace and resistance against problems, he added that the holy month helps mankind build themselves and prepared for the other eleven months.

Noting that all the Iranian people are a single nation who are leading a cordial life in a single land altogether, Rouhani said that they will surely withstand the complicated economic problems, as a united nation will never fail.

Referring to the Iraqi nation’s victory against terrorism, he added that if the Iraqi nation has not resisted the barbaric Daesh which believes in nothing but superstition, bloodshed and massacre, the terrorist group would have dominated the entire country.

As a result of resistance, the Iraqi nation is the big triumphant of the region which held a glorious referendum, Rouhani said, noting that they revealed that they will never be affected by big powers.