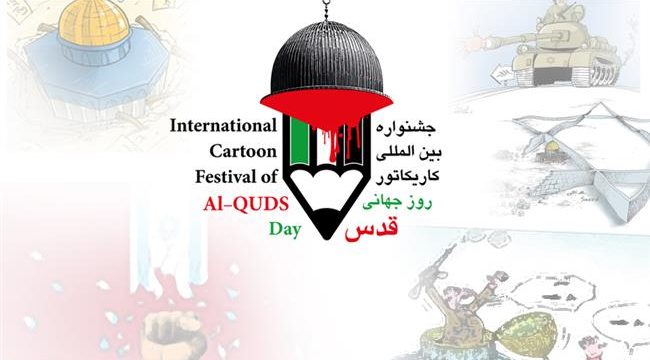 Press TV- Iran’s Ahlulbayt News Agency (ABNA) is set to hold the 2nd International Cartoon Festival on International al-Quds Day, calling on all cartoonists across the world to participate in the competition by sending their related works to the event.

The event, named “Quds; the Eternal Capital of Palestine,” will be held in cooperation with the Committee For Supporting The Islamic Resistance Of Palestinian People, the Qods News Agency (QODSNA) and the Islamic Art Portal Site.

The deadline for sending works will be 20 June and each cartoonist can send up to four art pieces with regard to the subject.

All participants will be awarded a certificate of participation in the festival, while the first, second and third winners will be granted an honorary diploma plus € 1500, € 1250 and € 1000, respectively.

For more information, the participants can visit the website of the festival at: http://www.islamicartz.com/cartoonQuds2018/en/news/54823

The rallies are held to mark Quds Day, which falls on the last Friday of the Muslim fasting month of Ramadan.

Every year on the last Friday of the Muslim fasting month of Ramadan, millions of people across the world take to the streets to mark Quds Day, showing their solidarity with the Palestinians and condemning Israel’s decades-long occupation and atrocities.

This year’s Quds Day comes weeks after the US officially opened its new embassy in occupied Jerusalem al-Quds amid a deadly Israeli crackdown on protests in the blockaded Gaza Strip.

The decision sparked outrage and deadly protests in Palestine and Muslim nations, which deem Jerusalem al-Quds as the future capital of a Palestinian state.