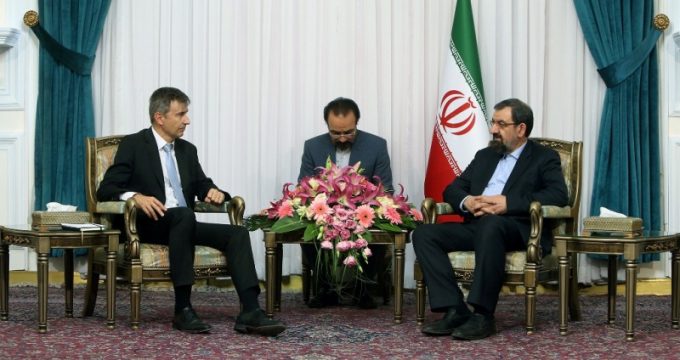 IRNA – Secretary of Iran’s Expediency Council Mohsen Rezaei said on Monday that US President Donald Trump is a hollow drum who lacks necessary qualifications for a big job.

In a meeting with Swiss Ambassador to Iran Markus Leitner on Monday, he added, “Regarding the JCPOA and Iran’s reaction to US exit from the deal, we are waiting for decisions of European parties, Russia and China, as we are monitoring their behaviors.”

“We want to see how they will fulfill their commitment under the deal in a bid to save it,” he said.

Iran nuclear deal, officially known as Joint Comprehensive Plan of Action (JCPOA) is an international pact violated by the Americans, Rezaei said, noting that they committed a big mistake which will bring them nothing but failure.

Pointing to re-imposition of unilateral sanctions, he said, “We are wise enough no to fall into this trap and we will manage our economy through rationality and instruments available.”

“If they impose sanctions on us for 40 years, we will able to run our economy through interactions inside the country and 15 neighboring states,” he said.

He further noted that Iran is a big country in the region which plays its part in the regional peace, security and trade.

Iran does not intend to wage a war against any country but it wants to live independently, Rezaei said, adding that every country it has entered was legal and at their request.

“If we did not defeat Daesh, now terrorists were in control of Baghdad, Kuwait and Syria,” he said.

The Swiss envoy, for his part, referred to the upcoming visit of Iran’s President Hassan Rouhani to Switzerland, reiterating his country’s support for the JCPOA.

He said the Swiss foreign minister in a statement has called US exit from the JCPOA as a wrong move.

Leitner also pointed to his country’s readiness for holding ceasefire talks between Yemen and Saudi Arabia.