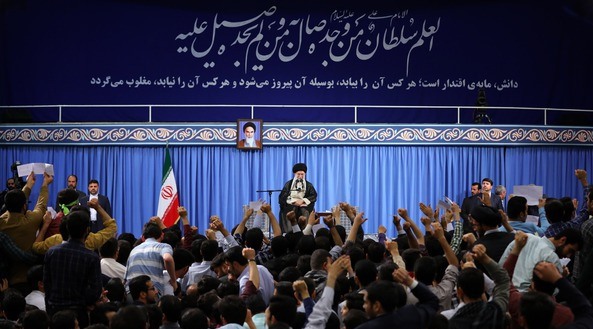 MNA – In a meeting with university students and representatives of students’ unions, Ayatollah Khamenei said that students need to continue fulfilling the objectives of the Islamic Revolution.

“Within the revolutionary forces, after the Islamic Revolution, there was a false assumption that the ‘revolution’ would last up until the formation of the Establishment, and after that goal was achieved, the revolution was finished,”  said the Leader of the Islamic Revolution on Monday evening in a meeting with a number of university students and representatives of students’ unions at Imam Khomeini Husseinieh in Tehran.

The leader of the Islamic Republic added that these ideals will not be realized in the short term and the revolution should persist until the ideals are realized.

Ayatollah Khamenei described ‘national confidence’, ‘political, economic and cultural independence’ and ‘freedom’ including ‘freedom of thought, speech and practice’ as some of the ideals of the Islamic Establishment, and said “if there is no freedom, there is no spiritual growth, and there will not be any society progress. But freedom requires law and framework. Otherwise it will lead to ‘tomfoolery’ that exists in the Western world.”

The Leader Ayatollah Khamenei also said “the establishment of justice”, “material and civilized progress based on technology,” “the progress of communicative ethics,” and “preparing space for the growth of spirituality and the liberation from lust and wrath,” were other ideals of the Revolution. He maintained that the realization of these ideals is not possible in the short term, but requires a long-term move, based on awareness and vigilance.

“Based on the facts, I believe that the Islamic Establishment has made progress in all these ideals during the past forty years,” the Leader asserted.

Ayatollah Khamenei went on to stress that the domestic problems have not emerged from the United States and Britain, but the internal factors were to blame for most of the country’s problems.

He warned, however, that while many of the issues have domestic causes, the enemies take advantage of them to serve their own political interests.