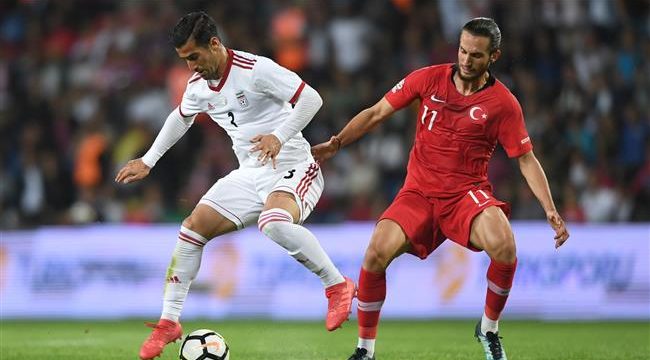 A left-footed shot from the center of the box by Turkey’s Cenk Tosun opened the scoring in the sixth minute. And another shot from Tosun in the 50th minute brought the score to 2-0 for Turkey.

Omer Bayram stopped the ball with his hand on the goal line in the 91st minute that led to a red card for him and a penalty shot for Iran, which Ashkan Dejagah put into the bottom left corner for a consolation goal for Team Melli.

The Turkish side has won five of the matches, and two of them have ended in a draw.

On May 20, Team Melli defeated Uzbekistan in a friendly fixture as part of its World Cup preparations.

Iranian footballer Rouzbeh Cheshmi, who currently plays for Iran’s Persian Gulf Premier League club Esteghlal, found the back of the net with a header in the 16th minute.

The 2014 champion Germany, Mexico, Sweden and South Korea are in Group F, and Belgium, Panama, Tunisia and England are in Group G. Group H has Poland, Senegal, Colombia and Japan.

The 2018 FIFA World Cup will take place from June 14 to July 15. Russia will open the event against Saudi Arabia in a Group A match at Moscow’s Luzhniki Stadium.