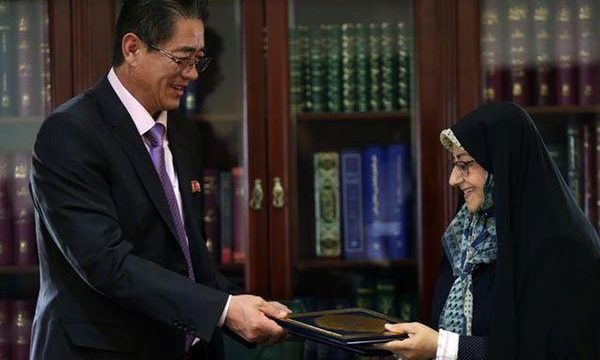 MNA – Iran and North Korea signed a Memorandum of Understanding (MoU) in line with broadening and enhancing bilateral cooperation in cultural field.

In this regard, North Korean Ambassador to the Islamic Republic of Iran met and held talks with the Chairwoman of the National Library and Archives of Iran (NLAI) Ashraf Boroujerdi.

Signing and sealing a MoU between National Library and Archives of Iran and National Library of North Korea will be a turning point in boosting cultural relationship between the two countries, Boroujerdi maintained.

For his part, North Korean ambassador to the Islamic Republic of Iran said, “North Korea attaches great importance to the progress of technology and I think that signing and sealing this MoU will pave suitable ways for the two countries in order to exchange their views in relevant issues.”

He proposed allocation of a place at National Library and Archives of Iran (NLAI) to showcase and display Korean books available for Iranian book enthusiasts.