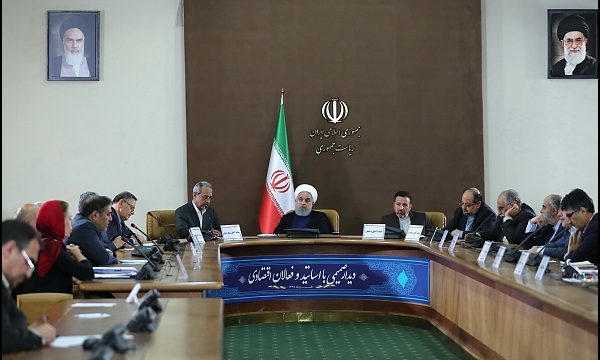 If we stand together, we’ll turn any sanction into opportunity: President Rouhani

president.ir- President described export-orientedness of the national economy as one of the requirements and main policies of the state and stated: “If we stand together, we will turn any sanction into an opportunity”.

Speaking late on Sunday in a meeting with university professors and business executives in a cordial atmosphere, President Hassan Rouhani said: “The private sector is able to thwart the weapon of sanctions and create opportunities”.

Stating that, “The 11th government attempted to return the country’s economy to normal conditions,” the President added: “We need 8% growth and significant investment to lead the country to development”.

He also continued: “Last year, we created around 800,000 net jobs, but we need to work harder for employment for the young”.

“Justice is important in the social fields, production, distribution and eliminating poverty,” said Rouhani, adding: “In the current conditions, we should work towards our economic goals more wisely”.

He also said: “During the time of sanctions, some misused the conditions instead of taking good advantage of them, and caused corruption in our economy”.

The President of the Islamic Republic of Iran also went on to say: “Today, unlike the past, the United States is isolated at political and economic stages of the world”.

“The International Atomic Energy Agency has verified Iran’s commitment to its obligations,” said Rouhani, adding: “We have collapsed Iranophobia; the current conditions must be taken good advantage of to the benefit of the country”.

Stating that, “We must use each other’s experiences and help each other and if the private sector becomes active and lively, the US will lose its weapon,” the President added: “It is a lie that the sanctions are not aimed at the people of Iran, they have targeted our people”.

Emphasising that we must use the experience of sanctions in years 1390 and 1391, he said: “Of course, the conditions are different today, because at that time, we were under sanctions by the United Nations and the resolutions of the Security Council, being isolated, but today, it is the other side and our enemy that is isolated”.

Dr Rouhani also added: “The main production sector must be sure about the price of foreign currency in the future,” saying that, “Businesses must be handed over to the real private sector”.

Saying that, “Public sector must give up its businesses faster,” President Rouhani stressed: “Export-orientedness of the national economy is one of the requirements and main policies of the state”.

He also went on to say: “Government’s plan to renew old neighbourhoods is the result of consultation and cooperation with the private sector”.

“The private sector should step forward for export-orientedness,” he said, adding: “Foreign investment and national export must be supported as prerequisite to development and progress”.

He also went on to say: “We must increase export, or else, the country will not progress. We must also open the doors on investors”.

Dr Rouhani added: “Unfortunately, some are happy that foreign companies cannot invest in Iran and express with joy that a foreign company has left Iran, thinking that if a company goes, their turn will come again, but we must not let the mistakes of 1390 and 1391 to be repeated in the economy of our country”.

The President of the Islamic Republic of Iran also went on to say: “Iranian investors inside and outside the country must be given priority and reassurance”.