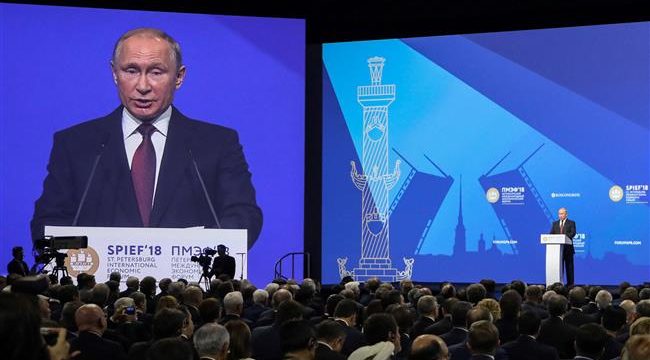 Press TV – Russia’s President Vladimir Putin has criticized a controversial decision by US President Donald Trump to re-instate sanctions against Iran, warning that such a move would only harm the global economy.

Putin – who was speaking at the 2018 St. Petersburg International Economic Forum – also said that Trump’s decision had also plunged the fate of an oil production cut agreement with the world’s biggest producers into uncertainty.

He emphasized that Moscow would have to wait and see how the situation around the nuclear agreement with Iran would proceed before making a decision on whether and under what circumstances extend the oil production cut agreement with other producers from the Organization of the Petroleum Exporting Countries (OPEC).

“In general terms, it [the market] must be fair. No artificial restrictions caused by political considerations should be used. They do not benefit the global economy but only harm it,” he was quoted as saying by TASS news agency.

Putin emphasized that consultations with the OPEC over ways to help stabilize oil prices still continued.

“Nothing unusual is taking place there, we are working in conditions agreed earlier. The practice will show what will happen further on. Indeed, much will depend on whether the nuclear deal with Iran is preserved or not and how it will affect the global energy market,” he said.

Putin said he believed that the global energy market was already balanced, stressing that he favored an oil price at $60 per barrel.

He said Russia would benefit from rising oil prices but was not in favor of what he described as the endless growth of energy prices.

“We are not interested in an endless growth of energy prices, of oil prices. If you asked me what price do we think is fair, then I’m telling you fair-not fair, but we were content with the price of $ 60 per barrel,” he was quoted as saying by TASS news agency.

Putin added that prices above this level can cause “certain problems for consumers, what the main producers are also not interested in.”

“Therefore, the small surge that we see today, it on the one hand benefits the Russian budget, our gold reserves are growing, and over the past year, the surplus of the trade balance amounted to $130 billion. All this, on the one hand, are positive elements, but on the other hand, we understand that the opportunities of our competitors, including shale oil producers in the US, are growing, they fill a certain part of the market, “Putin said. ” He added that Russia doesn’t have anything against it, since “this oil mainly goes to the American market.”