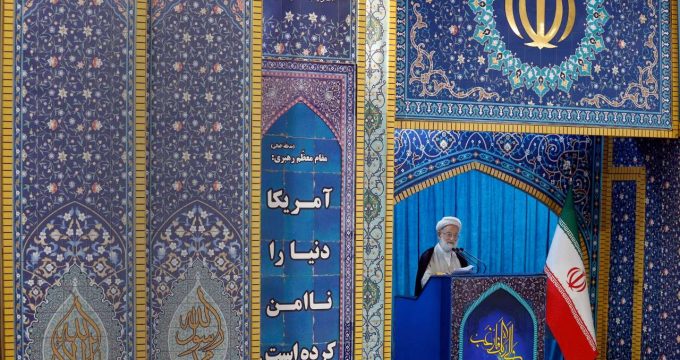 Senior cleric: Animosity to continue against Iran ‘with or without missiles’

MNA– Tehran provisional Friday Prayers leader condemned the enemies’ hatred towards Iran and Islam, saying even if Iran gives up its missile program, the Animosity towards it will continue.

“If Iran gives up all weapons and defends itself with rocks like Palestine, does the enemy leave Iran alone? Absolutely not; Have they left Palestine alone? Ayatollah Mohammad Emami-Kashani said at this week’s Friday Prayers in Tehran.

Ayatollah Emami-Kashani added that the enemies including infidels like United States and hypocrite Muslims like Saudis want the Iranian youth to be drug addicted and coach potato.

He went on to add that the western powers want to have someone like Saudi rulers in power of all Islamic countries.

He criticized the enemies for the economic and political pressures they impose on Iran, stressing that the only way to repel their threats and tackle the emerged problems is through relying on internal resources.

The Tehran Friday Prayers Leader further hailed the progresses that Iran has made in science and technology, saying that the problem is not Iran’s achievements in missile industry, but the enemies basically see the religion of Islam as a threat to themselves.