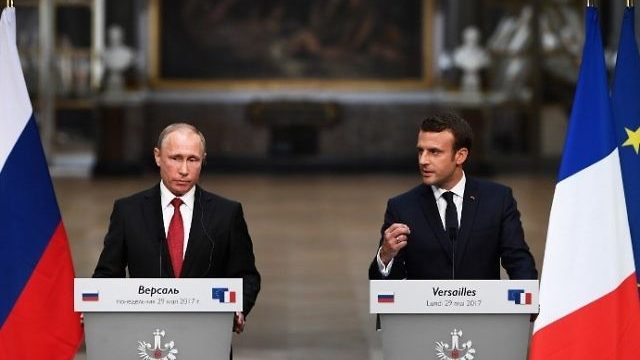 Reuters – President Vladimir Putin said on Thursday that Russia appreciated efforts by Europe to save the Iran nuclear deal despite the withdrawal of the United States and warned of “lamentable consequences” if it was not preserved.

Putin made the comment in a news conference with French President Emmanuel Macron, offering some support for the French leader’s plan for negotiating a broader agreement with Tehran to cover Iran’s ballistics program and its activities in the Middle East.

Macron met Putin seeking to win concessions on Syria, Iran and Ukraine after returning largely empty-handed from a state visit to the United States.

“But we cannot make preserving the Iranian nuclear deal dependent on these three parameters because if we do, it means that we too are withdrawing from the accord because the deal that exists foresees no additional conditions.”

A Macron adviser hailed Putin’s comments as a “key” point of convergence between Paris and Moscow as the Trump administration urges its European allies to sever economic ties with Iran.

After talks that ran long over schedule, Macron and Trump entered the news conference looking relaxed and smiling. Macron acknowledged Paris and Moscow disagreed on a range of issues but called for “strong multilateralism”.

AT ODDS OVER SYRIA

As Macron spoke at length, Putin’s eyes frequently drifted towards the ceiling, his brow slightly furrowed.

There were few signs Macron succeeded in shifting Putin’s stance over Syria, where Russian and Iranian military support for President Bashar al-Assad over the past three years has allowed Assad to crush the rebel threat to topple him.

The two men agreed on creating a coordination mechanism among world powers to push ahead with finding a political solution in Syria, and that the focus should be on a new constitution and setting up elections that would include all Syrians.

“We need to be talking about the situation after the war. The key is to build a stable Syria,” Macron said.

But he won no clear backing from his Russian counterpart for an international body that would attribute responsibility for chemical weapons attacks.

France, together with the United States and Britain conducted a missile attack against the heart of Syria’s chemical weapons program in mid-April in retaliation for a suspected poison gas attack a week earlier.

Addressing North Korea, both men said they hoped the United States and North Korea would continue working towards denuclearizing the Korean peninsula after U.S. President Donald Trump called off a planned summit.

Macron said he hoped Trump’s move “was just a glitch in a process that should be continued.”