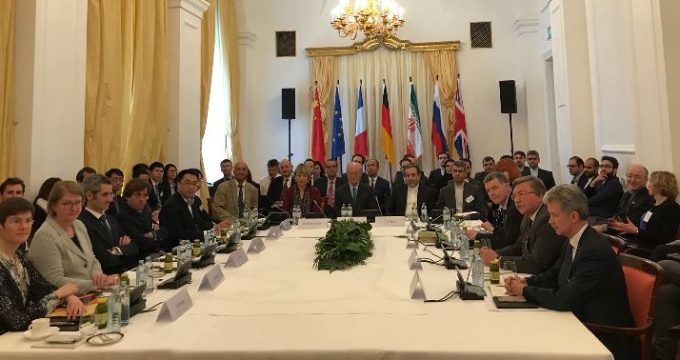 IRNA – The Joint Comprehensive Plan of Action (JCPOA) joint commission meeting kicked off in Vienna’s Cobourg Hotel on Friday to hold consultations on mechanisms to continue implementation of the deal.

For the first time since the deal came into force in 2015, China, Russia, France, Britain and Germany have gathered at Iran’s request without the United States, which pulled out on May 8.

IAEA in its 11th periodical report released on Thursday once again verified Iran’s adherence to its nuclear deal with world powers.

It was the first report issued by IAEA after US withdrawal from the internationally recognized treaty (JCPOA).

An informed source told the Islamic Republic News Agency (IRNA) that Amano presence is symbolic to show that only the IAEA can confirm a country’s breach or commitment to its obligations.

The European Union in a statement had said earlier that the JCPOA joint commission meeting is to study the consequences of the US exit from JCPOA and hold consultations on mechanisms to continue implementation of the deal.

Araqchi arrived in Vienna on Thursday morning and held bilateral meetings with Schmid and head of Russia delegation before start of the JCPOA joint commission meeting.

Abbas Araqchi, Helga Schmid, JCPOA joint commission meeting, US withdrawal from JCPOA May 25, 2018
Iran supports national solidarity in Lebanon
Senior cleric: Animosity to continue against Iran ‘with or without missiles’