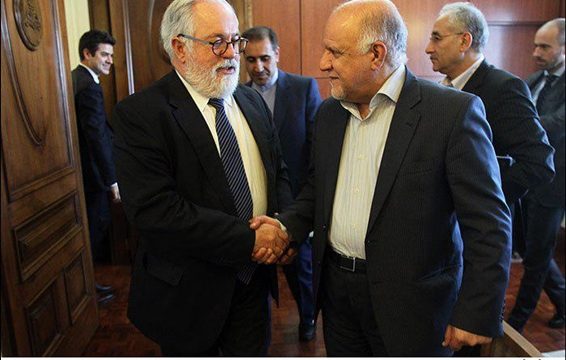 What happened in Iran Petroleum Ministry’s 15th floor on Saturday?

Iranian Diplomacy- A day after EU heads of states held a multilateral meeting in Sofia, the EU commissioner for energy led a delegation to Iran in an effort to signal this message: we are committed to back Iran for the sake of global oil trade.”

To send his message with an even louder voice, an entourage of journalists from major international media organizations accompanied the commissioner. I was also there in the Petroleum Ministry’s fifteenth floor where Miguel Arias Canete met Minister Bijan Zanganeh. Here, I go a little beyond the official communiques trying to simplify what Iran’s demands were and what the EU response was.

1- Iran demanded to maintain its exports of crude and its condensates as well as petrochemical products to the EU at the same level as in April (700,000 barrels per day). Apart from that, Iran was also seeking a guarantee from the EU that Iran’s business with other customers including China and India would be not affected by the US sanctions. The EU has promised to keep buying Iran’s oil as before. But it could not pledge if Iran’s other customers would do so in the face of US sanctions. It was decided to hold further negotiations to reach a workable plan over Iran’s exports to the EU, China and India.

2- The Iranian side has also asked the EU to guarantee a safe route for the transfer of oil money to Iran. The EU delegation has promised to conduct what it can to keep the SWIFT open for Iran. Furthermore, the EU has proposed to open a direct channel for the transfer of money from the EU Central Bank to Iran’s central bank. Also, Iran sought a guarantee from the EU for the transfer of money from Iran’s other customers including China and India. Further negotiations are expected to be held for that too. The EU has promised to equip the Europe Investment Bank with the required infrastructures that can facilitate money transfer to Iran.

3- Insurance of Iranian shipping lines’ fleet was another thing discussed between both sides. Iran proposed that the EU can use the Japanese experience and deposit certain amount of money in P&I, so that P&I can insure the Iranian containers and ships.

4- Investment by multinational companies on Iran’s oil sector was also discussed between the two. Particularly spotlighted was Total’s investment in South Pars Phase 11. The EU delegation promised to do whatever it can to exempt Total from the US sanctions, because the contract with Total was signed before the US withdrawal from the JCPOA. However, the EU could not guarantee if other companied would make investments in Iran.

By sending its energy commissioner to Iran, the EU has proved that it remains firm on its efforts to save the JCPOA and maintain its banking relationship with Iran. The European Union is also discussing restoration of blocking regulations to protect trade between Tehran and Brussels. However, the fact is that trade relations in the West are freer and more complex than it is thought. Thus, when reading the feel-good news about the EU support for JCPOA, one should also have the possibility in mind that the EU would eventually succumb to Washington’s pressure. Will the EU become a US vassal state? A French minister has vehemently said no. Today, the EU stands at a critical juncture. We should sit and watch how the EU would redefine itself. Till then, please fasten your belt.

* This article was originally published in Hamshahri daily on May 20, 2018. Reza Zandi is a senior journalist and analyst in oil & energy.

Iran’s Petroleum Ministry, Miguel Arias Canete, US withdrawal from JCPOA May 23, 2018
Urmia in better state after rainfalls
Pompeo calls for ‘diplomatic’ approach with Europe towards Iran