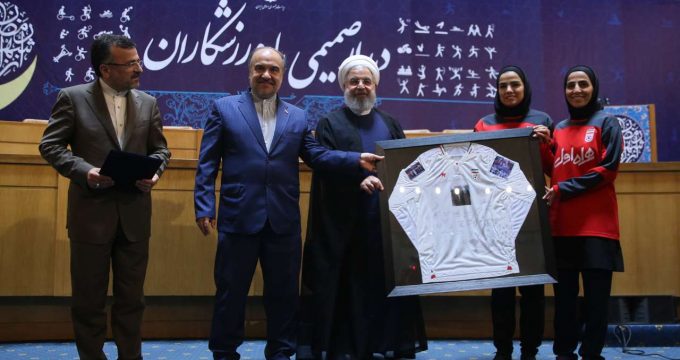 IRNA – President Hassan Rouhani says the Iranian nation never fears empty threats and is much greater than Trump, Pompeo, Bolton and other extremists who have gathered together in Washington.

In a meeting with a group of athletes here Tuesday night, Rouhani said the Iranian nation has been victorious and a source of honor on all scenes in the course of History.

Addressing himself to US President Donald Trump, President Rouhani said ‘Mr. Trump I announce from here that the Iranian nation will emerge triumphant and successful in the face of you.’

Elsewhere in his speech, Rouhani said if hope and vibrancy exist in a society all problems will be solvable, Rouhani said.

He said that it is true that athletes’ victories and success are the results of their efforts and those of their coaches but above all is their belief in victory and championship.

Rouhani said the athletes play an effective role in inspiring hope and vibrancy in the society and boosting the morale of people. ‘Sometimes one of your matches or competitions make people cheerful and in high spirit for hours, days and even months,’ he said.

Prior to Rouhani’s remarks, Minister of Sports and Youth Affairs Masoud Soltanifar and head of the National Olympic Committee Reza Salehi Amiri lauded the government’s support for the sports society and reported on the measures take so far to uplift the status of sports in the country.