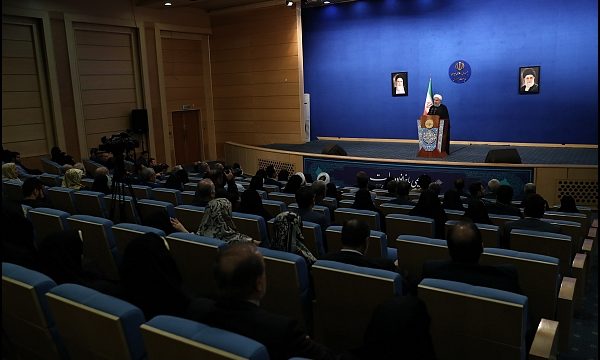 US unable to bring Iranian nation to knees

MNA – President Rouhani met with government family in an Iftar ceremony and said “one of the most important effects of the holy month of Ramadan is intimacy and being together.”

Mentioning that since last year the government has been facing with many ups and downs and problems, President Rouhani appreciated the members of the government and their families for working hard for running the country.

The wealth of the region and the Zionist system of state terrorism, as the evillest regime in the history, and the greatest economic and military power of the world are against the Iranian nation, Rouhani added, saying “the Iranian nation have stood on their feet powerfully against all these pressures.”

“The big part of the burden of independence and ups and downs that we are experiencing are on the shoulders of the government and its different political, economic and cultural sectors,” continued Rouhani.

Stating that today, Iran is in special political conditions, he said “we are proud of what we have done in our critical political times and today, we will certainly overcome these problems.”

He also said “the United States and other powers supporting them cannot bring the Iranian nation to their knees, but rather we are standing and we can go down this path well.”

The President also appreciated the government employees and their families for their efforts and supporting the authorities, saying “families must lay the groundwork for authorities’ calmness so that they can serve people better.”