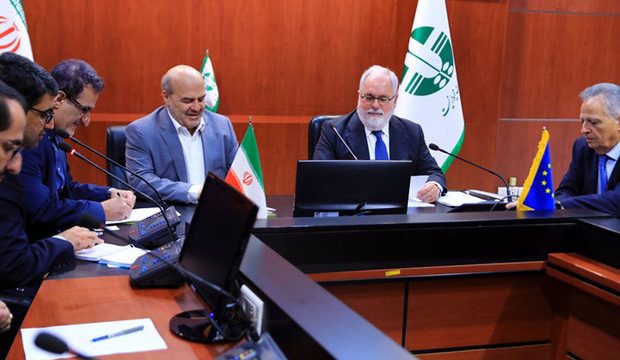 MNA – The chief of Iran’s Department of Environment Isa Kalantari and EU Commissioner for Climate Action and Energy Miguel Arias Cañete hold a meeting on Monday about environmental challenges.

Touching on the long history of relations between Iran and Europe, Kalantari hoped that European countries could retain their independence against the United States in this stage.

Referring to status of Paris Agreement in Iran, he said, “the legal procedures for ratification of Iran’s joining to the agreement are under way.”

Despite the complex and difficult environmental conditions of the country, including significant drop in rainfall, rise of temperature, significant drying of wetlands and the imposition of unfair sanctions, the administration continues to make major contributions to maintain and promote the environment, he added.

“For instance, we have managed to control the drying process of Lake Urmia and even stabilize the lake,” he highlighted.

Coping with dust storms, reviving wetlands, waste management and improving the air quality in urban areas are four priority of the administration regarding the environment, Iran’s chief of environment said, adding, “the European Union can also cooperate with Iran through transfer of knowledge, new technologies and funding.”

The use of clean and renewable energies, prevention and control of coastal pollution in the Persian Gulf, optimization of energy consumption, development of the public transportation networks, automobile production and proper waste management are among other areas that Iran and Europe can boost their cooperation, Kalantari stated.

He also suggested the establishment of a committee comprising Iran’s Department of Environment and European Commissions for Environment and Climate Action to take important steps to address the environmental challenges of Iran.

Miguel Arias Cañete, for his part, emphasized that EU sticks to all its commitments to the Islamic Republic of Iran.

Touching on the US withdrawal from Paris agreement, he added that the United States’ refusal to pay its $2 billion contribution has caused difficulties in enforcing the agreement and European countries are trying to address this problem.