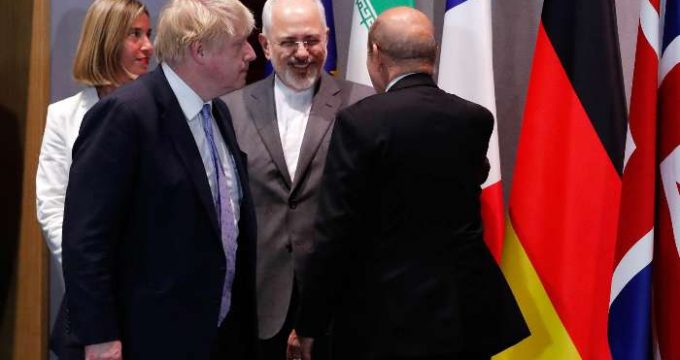 May 21, The Iran Project – Europe has increased its diplomatic efforts to save the 2015 landmark nuclear deal with Iran after US President Donald Trump withdrew from the accord.

Foreign Minister Mohammad Javad Zarif  started his whirlwind diplomatic tour on Sunday (May 13), and wrapped up it on Wednesday (May 16) to gauge international readiness to guarantee Iran’s interests if it decides to remain in the nuclear deal after US pullout.

Starting his tour, Zarif departed for Beijing before heading to Moscow and Brussels to hold meetings with the remaining parties to the 2015 agreement.

The trip comes less than a week after Trump announced that the US was walking away from the Joint Comprehensive Plan of Action (JCPOA) which he described as a “horrible deal”.

During his stop in Beijing, the top Iranian diplomat held talks with his Chinese counterpart Wang Yi to try to rescue the nuclear deal from the brink of collapse.

In the meeting with Chinese foreign minister, Zarif expressed hope that with this visit to China and other countries within the next two days, the sides would be able to depict a clearer vision of the nuclear deal’s future.

The Chinese top diplomat, for his part, voiced his content with the point that Zarif started his pro-JCPOA tour from China and voiced hope that the visit be of great benefit for the JCPOA and Iran.

On the second leg of his diplomatic mission, Zarif visited Moscow on Monday (May 14) to meet with his Russian counterpart Sergey Lavrov following similar negotiations in China.

At a meeting with his Russian counterpart, Zarif said Russia has confirmed its preparedness to respect the seven-party nuclear agreement reached in 2015 despite the US withdrawal.

Also, Lavrov stated that Russia and Europe had a duty to “jointly defend their legal interests” in terms of the Iran deal.

Eventually, Zarif traveled to Brussels on Monday (May 14) to meet senior European officials on the final leg of a whirlwind diplomatic tour.

“We have started an intensive process (and) the economic benefits inside the JCPOA (Iran deal) should be preserved for Iran,” Zarif said on arrival in Brussels ahead of a meeting with his British, French and German counterparts, adding that “the Guarantees of benefits of the JCPOA should be given to Iran. We will have to see whether (those) remaining in the JCPOA can deliver those benefits to Iran.”

Meanwhile, Zarif and Mogherini discussed the latest developments connected with Iran nuclear deal after US unilateral withdrawal from the agreement.

Zarif also discussed over phone a range of issues with four counterparts from Italy, Bulgaria, Austria and Spain and reviewed JCPOA as well as the need for preserving it as a unique diplomatic achievement in contemporary era.

Speaking to reporters on the way back to Tehran after high-profile meetings in Brussels, the Iranian foreign minister said an upcoming session of the joint commission of the parties to the JCPOA will exclude the US. He stressed that the parties to the 2015 Iran nuclear deal will hold a JCPOA joint commission meeting next Friday, albeit without the US.

On Wednesday (May 16), German Chancellor Angela Merkel pushed back against Washington’s rejection of the Iran nuclear deal, and reasserted a defense of the agreement in remarks to lawmakers in the Bundestag lower house of parliament.

She also said that Iran was complying with its commitments under the deal.

“This agreement is everything other than ideal, but Iran is, according to all the knowledge of the international nuclear authorities, sticking to the commitments of the agreement,” Merkel noted.

On Thursday (May 17), French President Emmanuel Macron also reiterated that nuclear deal with Iran should be supplemented and it is necessary to continue negotiations, including on missile program.

The EU states intend to ensure the presence of their companies in Iran despite the US withdrawal from the JCPOA, Macron said.

In a meantime, UK Foreign Secretary Boris Johnson said Wednesday that the agreement with Iran was still a valid pact despite the US withdrawal.

Johnson said he and his European partners (German and French) have come to Brussels to show their commitment to the Iran nuclear deal.

The UK foreign minister said in his opinion despite the US pullout from the deal it was still a valid agreement and for this reason the United Kingdom along with two other European countries will consider offering Iran a package of proposals in order to persuade it to remain in the deal.

Meanwhile, Russian upper house speaker Valentina Matvienko said in an interview to Sputnik the United States has not provided any serious argument in favor of withdrawing from JCPOA.

“We are wondering what the reason is, the argument for the US withdrawal from the agreement. But the world did not hear a single serious argument why this agreement should be scrapped, apart from claims that it is bad and it was signed by former [US] President Barack Obama,” Matvienko noted.

Dutch Prime Minister Mark Rutte has described the way US president Donald Trump pulled out of the Iran nuclear deal as “bullish”.

Speaking to broadcaster NOS in the Bulgarian capital Sofia, Rutte said: “After being urged by Europe not to do it, the US goes and pulls out of the deal with Iran in a very bullish way.’ ‘America is doing all sorts of things under its own steam, without taking its allies into account. And that is not a good thing.”

Austrian Chancellor Sebastian Kurz expressed concern on Thursday over “unpredictable” US policies that threaten economic interests of his country and Europe.

“We are witnessing not only a very unpredictable US policy but the one that threatens our economic interests in Austria and Europe,” Kurz posted on his Twitter page.

Also, European Council President Donald Tusk lashed out at the US president, blasting his decision to pull out from the Iranian nuclear deal and stirring up trade disputes with other countries, and lamenting that one does not need enemies with friends like Trump.

The senior official stated that EU should be grateful to Trump as he helped the bloc get rid of its illusions.

Before leaving on his three-nation tour, Zarif published a government statement on his Twitter page, slamming the “extremist administration” of Trump for abandoning “an accord recognized as a victory of diplomacy by the international community.”

US President Donald Trump announced on May 8 that Washington was walking away from the JCPOA, which was reached between Iran and the five permanent members of the UN Security Council — the US, Britain, France, Russia and China — plus Germany in 2015.

Trump also said he would reinstate US sanctions on Iran lifted by the accord and impose “the highest level” of economic bans on the Islamic Republic.

The deal lifted sanctions in 2016 in return for Tehran limiting its nuclear program.

Iran has reiterated it would remain in the JCPOA for now, pending negotiations with the other signatories in the coming weeks before making a final decision on its future role in the agreement.

Now the main question that has come to the fore is that would Europe really remain committed to the JCPOA, unanimously endorsed by UN Security Council Resolution 2231?