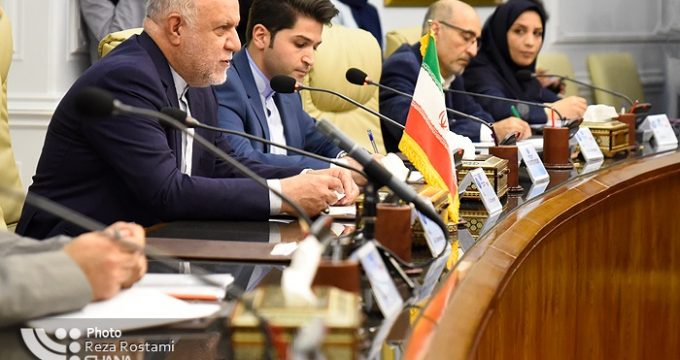 MNA – Iranian Oil Minister Bijan Namdar Zanganeh said on Saturday after meeting with European Commissioner for Energy Miguel Arias Cañete that EU has sent a message to Tehran that the bloc is determined to protect Iran nuclear deal.

Iranian Oil Minister Bijan Namdar Zanganeh asserted that the visit of European Commissioner for Energy Miguel Arias Cañete carried a special message and added, “the two sides should focus on details to put into practice the brokered agreements.”

Mr. Zanganeh’s remark came after his meeting with European Climate Action and Energy Commissioner Miguel Arias Cañete in Tehran on Saturday in a bid to protect Iran’s oil trade following US withdrawal from the nuclear deal and the reinstatement of anti-Iran sanctions.

“The European Climate Action and Energy Commissioner delivered the message of EU on protecting the JCPOA to Iran and expressed the resolve of the European leaders in this regard,” reiterated Mr. Zanganeh.

“In today’s meeting, we discussed the ways to materialize the political will of the European Union and we also exchanged views on issues formerly discussed by the foreign ministers of Iran and the three European countries (UK, France, and Germany),” recounted Mr. Zangeneh.

The Saturday meeting was aimed at presentation of plans for continuing oil and gas purchases and protection of European companies from renewed US sanctions on Iran.

“The EU Energy Commissioner voiced the political will of the Union in Sofia, Bulgaria, [to protect JCPOA],” he added.

The official said, “based on a statement issued by the EU, representatives from the two sides will enter into detailed discussion in this regard.”

Asked whether the US pullout from the JCPOA would force an end to the OPEC cut deal by the end of the 2018, Zangeneh said, “any decision in the Organization needs consensus [from the members].”

“I believe if the EU helps us and honors its promises, the level of Iran’s oil exports will remain intact and this would not be a reason for changing a decision made in the past.”

Responding to a question on what guarantees existed that India and China would continue oil purchase from Iran, the official said, “we have talked to them and received no negative feedback from them.”

Mr. Zangeneh had previously announced that Iran planned for an oil output of 4.2 million barrels per day. Asked whether the country would continue to pursue such an objective in the face of US sanctions, he said, “that would be difficult but we would not put that aside. It might take more time, but we will not do away with it.”