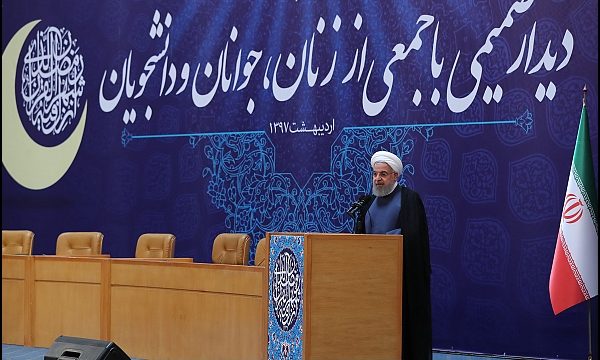 Rouhani: US plot to encourage Iran to quit JPCOA fails

Addressing a gathering of youth and students in the capital, he added that the US thought that as soon as it quitted the deal, Iran would follow the suit, too. Therefore, Iran’s dossier would be sent to UN Security Council and all the sanctions would be reinstated.

“However, in the first stage, we did not allow the US to achieve its goal and its plots failed, as the entire world except certain states and the fake Zionist regime stood against the US,” he said, noting that this means Iran’s foreign policy has been successful.

While all the countries were involved in imposing sanctions against Iran, today big European countries, Russia and China and all major world states described Trump’s move as incorrect, illegal and against international peace and security, Rouhani said.

Elsewhere in his speech, the chief executive referred to his electoral campaigns, saying, “We have pledged not to go back. We declared in a loud voice that we will never get back in economy and will never allow the country to experience negative growth.”

“A 15 percent increase in non-oil exports in the first month of new Iranian calendar year shows that we were on the right track,” he said.