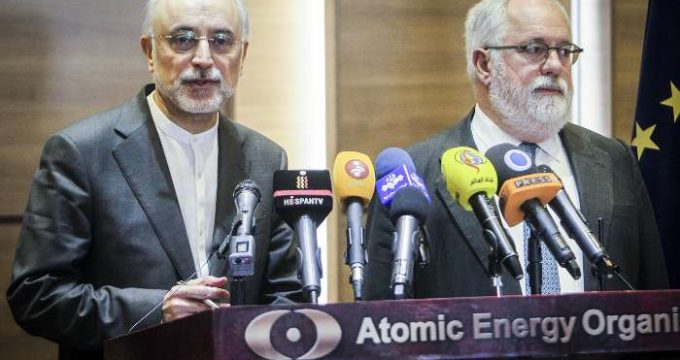 Iran wary as EU presents measures to save nuclear deal

Bourse and Bazaar | AFP: Iran said Saturday it would wait to see whether Europe produces tangible results in overcoming US sanctions before deciding whether to stay in the nuclear deal, as a top EU official visited Tehran to present plans to maintain trade ties.

“The ball is in the court of the EU. They have presented different proposals, we will see if they materialize,” Iran’s Atomic Energy Organization head Ali Akbar Salehi told reporters.

He was speaking after a meeting with EU Energy Commissioner Miguel Arias Canete, the first high-level Western official to visit Iran since the US withdrew from the 2015 nuclear deal earlier this month.

Canete called the nuclear deal “fundamental for peace in the region” as he outlined EU plans to continue oil and gas purchases and protect European companies, despite renewed US sanctions on Iran that are set to be phased in over the next six months.

“For sure there are clear difficulties with the sanctions,” Canete said at a press conference alongside Salehi.

“We will have to ask for waivers, for carve-outs for the companies that make investments.”

Salehi acknowledged Europe’s efforts but said: “We want tangible results, otherwise we take our own decisions. I personally don’t want to see such decisions being taken.”

Iran has threatened to resume industrial uranium enrichment “without limit” unless its interests are preserved.

Salehi said the Iranian people had lost trust in the nuclear agreement, and if trade benefits were not protected “they will lose more confidence… and we will be forced to leave.”

European leaders have outlined measures to protect EU firms from US sanctions.

But several of their companies—including France’s Total and Holland’s Maersk — have already said it will be impossible to stay in Iran once US sanctions are reimposed unless they receive explicit exemptions from Washington.

Iran’s trade with the European Union is around 20 billion euros, evenly split between imports and exports.

Iran, which has the world’s fourth-biggest oil reserves, produces some 3.8 million barrels of oil per day, 70 percent of which goes to China and other Asian countries, and 20 percent to Europe.

It also has the second-biggest gas reserves in the world, but limited infrastructure means little is exported.

Russia and China—the other parties to the nuclear deal—have also vowed to maintain trade with Iran and are less vulnerable to economic pressure from Washington.