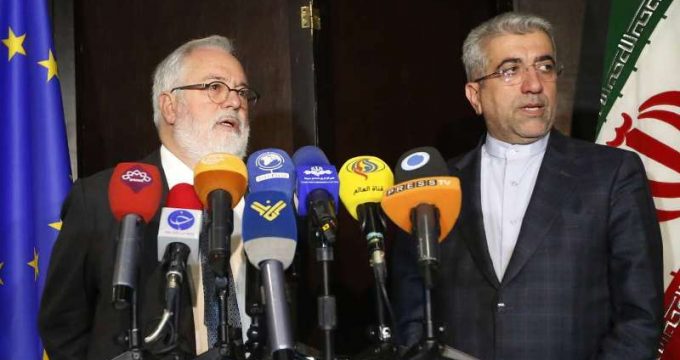 IRNA – Energy Minister Reza Ardekanian said here Saturday night that a conference on investments by European small and medium-sized firms in Iran would be held in autumn this year as the first step towards developing Iran-Europe trade ties.

Speaking at a press conference with visiting EU Climate Action and Energy Commissioner Miguel Arias Cañete, Ardekanian told reporters that the conference to be held in Tehran would provide an opportunity for Iran and EU Member States to prepare the grounds for expansion of cooperation and attraction of foreign investments.

Through negotiations held between Iran and EU, both sides can prepare a plan of action in order to prevent any halt in their cooperation and pave the way for investments by small and medium-sized enterprises, he said .

He also quoted the EU energy commissioner as saying that leaders of the EU Member States in their recent summit in Sofia, Bulgaria, decided unanimously to fulfill their obligations towards Iran.

In the Sofia summit, the participants reached a joint decision to cover investments by European small and medium-sized firms in Iran through Europe Investment Bank, he said.

The European climate action and energy commissioner, for his part, said that given the US exit from the Iran nuclear deal, known as the Joint Comprehensive Plan of Action (JCPOA), the European Commission has set up a committee to lift obstacles in the way of investments in Iran.

In response to a question on how Europe want to transfer Iran’s foreign exchange incomes from oil exports, Cañete said with regards to the enforcement of US sanctions, Europe would try to lift the obstacles.
He said the aim of the visit to Tehran of the EC delegation is to neutralize as much as possible the impacts of sanctions on transfer of hard currency to Iran.

He said the EC efforts are not limited to the money transfer alone but rather it will try to convince the European companies to implements various projects in Iran.

The European Commission in a press released on May 18 announced that it would launch the process of activating a law that bans European companies and courts from complying with US sanctions against Iran after Washington pulled out of the landmark 2015 nuclear deal.

Jean Claude Juncker, president of the European Commission, said on Thursday the commission has a ‘duty to protect European companies’ from American sanctions.

‘We now need to act, and this is why we are launching the process to activate the ‘blocking statute’ from 1996. We will do that tomorrow [Friday] morning at 10:30,’ he told a news conference in the Bulgarian capital, Sofia, after a meeting of European Union leaders.

Earlier Iranian MP from Tehran Mahmoud Sadeqi told IRNA that the blocking statute did not oblige the European companies not to comply with US laws but can protect those European firms that are affected by the US sanctions.