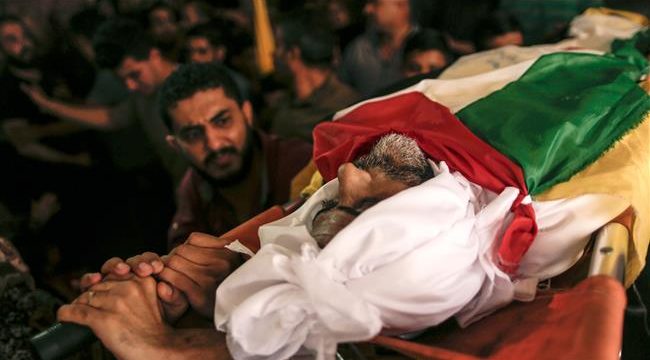 Press TV- Two Palestinians who were critically wounded by Israeli army gunfire nearly a week ago during an anti-occupation protest along the border between the besieged Gaza Strip and occupied territories have succumbed to their injuries.

The statement added that Mohammed Mazen al-Ayyan, 20, died in al-Quds Hospital on Saturday morning after doctors and medical staff could not save his life.

He had been shot and wounded east of al-Bureij refugee camp in the central Gaza Strip.

At least 64 Palestinians were killed and more than 2,700 others wounded near the Gaza fence on the eve of the 70th anniversary of Nakba Day (Day of Catastrophe), which coincided this year with the relocation of the US embassy from Tel Aviv to the occupied city of Jerusalem al-Quds.

On Thursday, Turkish Foreign Minister Mevlut Cavusoglu said the Israeli regime should be brought before the International Criminal Court for the recent Gaza massacre.

“Israel should be taken to the International Criminal Court [over the killing of Palestinians]. Since third parties cannot do it, Palestine needs to initiate this,” Cavusoglu said in an interview with state broadcaster TRT.

The top Turkish diplomat added, “We are analyzing what kind of legal steps can be taken [against Israel]. Israel should account for its actions.”

Meanwhile, Muslim leaders have called for an international force to be deployed to protect Palestinian people against Israeli crimes.

During a summit in Istanbul, Muslim leaders call on the international community to provide protection for the Palestinian people against Israeli crimes.

In a final communiqué issued following an emergency meeting in Istanbul on Friday, the Organization of Islamic Cooperation (OIC) condemned the May 14 massacre of dozens of Gazans as “savage crimes committed by the Israeli forces with the backing of the US administration.”