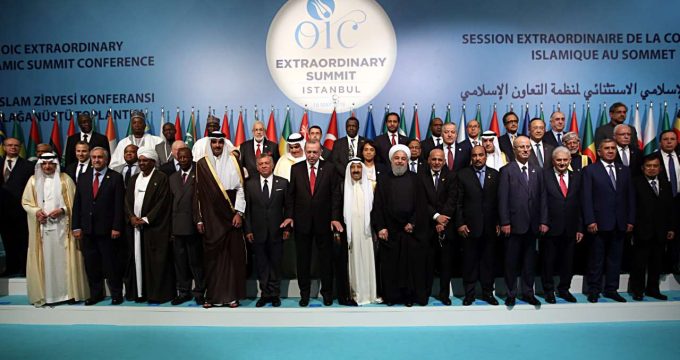 IRNA – Organization of Islamic Cooperation (OIC) emergency meeting ended late Friday by issuing a statement calling for setting up a committee to deal with the Zionists’ crimes in the occupied lands.

The statement called on major international bodies such as Security Council, UN secretary general, Human Rights Council and UN High Commissioner for Human Rights to immediately set up a committee to probe Zionists’ crimes in the occupied lands.

The statement also underlined significance of cooperation within a specified framework with Arab League, Europe and Africa and other international and regional institutions.

Leaders of the OIC Member States also urged the international community to protect the Palestinian nation by dispatching international peace keeping forces to the occupied lands.

Muslim countries participating in the Istanbul meeting condemned the Zionist regime for committing inhuman, barbaric and illegal crimes against the oppressed Palestinian nation and illegitimate attack on the occupied lands and crimes in Gaza.

The statement called the Zionist regime as an occupier and main culprit behind the deaths of over 60 and injuring of over 2,700 Palestinian civilians during Nakba protests.

The crimes came on the heels of illegal relocation of US Embassy to Holy Quds, which emboldened the Zionist regime to continue its strikes against the innocent people, the statement said.

Stressing the need for maintaining historic, spiritual and legal situation of Quds, the statement called on the international bodies, UN Security Council in particular, to prepare the grounds for punishing the Zionist regime for its crimes against the Palestinian nation.

The statement said that illegal recognition of Quds as the capital of the occupying regime of Israel by the US is invalid, describing it an attack on the historic, national, natural and legal rights of the Palestinian nation.

The extraordinary session of OIC on Palestine, Israeli crimes in Gaza and relocation of the US embassy relocation started on Friday with the presence of high-ranking officials from more than 40 countries in Istanbul.

Leaders of OIC Member States came together in Istanbul on Friday evening to condemn the Zionist regime’s recent crimes and relocation of US embassy to Quds.

The Islamic Republic of Iran participated in the event at the highest level, as President Hassan Rouhani and Foreign Minister Mohammad Javad Zarif took part in the two-day event.

Turkey as the rotatory chairman of OIC has invited leaders and foreign ministers of Islamic states to attend the emergency meeting aimed at reviewing situation in the occupied lands.