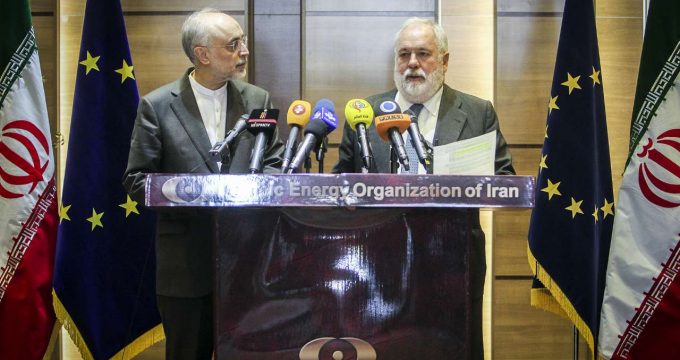 Europe reassures Iran of commitment to nuclear deal without U.S.

Reuters– The European Union’s energy chief tried to reassure Iran on Saturday that the bloc remained committed to salvaging a nuclear deal with Tehran despite U.S. President Donald Trump’s decision to exit the accord and reimpose sanctions.

The European Commissioner for Energy and Climate, Miguel Arias Canete, delivered the message during a visit to Tehran and also said the 28-nation EU, once the biggest importer of Iranian oil, hoped to boost trade with Iran.

“We have sent a message to our Iranian friends that as long as they are sticking to the (nuclear) agreement the Europeans will… fulfill their commitment. And they said the same thing on the other side,” Canete told a news conference.

“We will try to intensify our flows of trade that have been very positive for the Iranian economy.”

Iran’s nuclear chief Ali Akbar Salehi said his country hoped the EU would manage to salvage the 2015 deal, in which Tehran agreed to curb its nuclear program in return for the lifting of most Western sanctions.

“We hope their efforts materialize… America’s actions… show that it is not a trustworthy country in international dealings,” Salehi told the joint news conference in Tehran.

Since Trump’s announcement on May 8 about the U.S. exit, European countries have said they will try to keep Iran’s oil and investment flowing, but have also admitted they will struggle to provide the guarantees Tehran seeks.

“There are all kind of possibilities, we can … start the 20 percent enrichment.”

Under the 2015 deal, Iran’s level of enrichment must remain at around 3.6 percent. Iran stopped producing 20 percent enriched uranium and gave up the majority of its stockpile as part of the agreement.

Uranium refined to 20 percent fissile purity is well beyond the 5 percent normally required to fuel civilian nuclear power plants, although still well short of the highly enriched, or 80 to 90 percent, purity needed for a nuclear bomb.

Iran has struggled to reap benefits from the accord, partly because of remaining unilateral U.S. sanctions that have deterred major Western investors from doing business with Tehran.

Iranian officials have tried to assure ordinary Iranians, frustrated by high unemployment and stagnant living standards, that Trump’s decision would have no impact on the country’s oil-reliant economy.

“Unfortunately because of the negative interferences of the U.S., we were not able to reap the fruits of the JCPOA (Joint Comprehensive Plan of Actions) we expected,” Salehi said.

“So the public opinion is not as supportive as it was before and if the other side does not deliver… we will keep losing the support of our people for the JCPOA.”

Writing by Parisa Hafezi in Ankara; Editing by Gareth Jones and Ros Russell