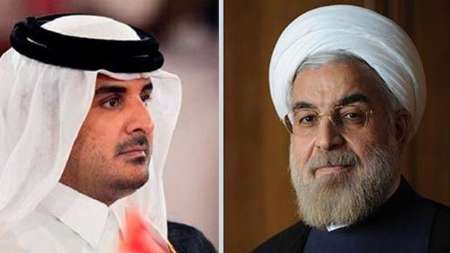 Muslim states must give proper response to Israel’s crimes

MNA – Iranian President Rouhani in a phone conversation with Emir of Qatar on Thu. said Muslim countries must give a proper response at Istanbul OIC summit to Israel’s recent aggression against Palestinians.

Iranian President Hassan Rouhani held a telephone conversation with Emir of Qatar Tamim bin Hamad Al Thani on Thursday, during which he called on Islamic countries participating at the OIC summit in Istanbul to give a proper response to the recent killing of peaceful Palestinian protesters by Israeli forces.

Iran considers the siege of Qatar by neighboring Arab states (Saudi Arabia, Bahrain and the United Arab Emirates) a wrong and unjust measure, Rouhani said, adding that Tehran welcomes expansion of cooperation with Qatar in all areas.

“Iran is always ready for talks with the Persian Gulf littoral states on regional issues, but sadly there are certain countries which assume that they should choose another alternative to talks,” president Rouhani said.

No power or superpower can replace the good cooperation among neighboring countries in the region, Rouhani stressed.

The Iranian president further noted the US unilateral pullout from the JCPOA, saying the move is not in the best interest of the US or other signatories to the nuclear agreement; “I am glad that today the majority of countries in the world have condemned the US move,” Rouhani said.

The Qatari Emir, for his part, called for expansion of all-out relations between Tehran and Doha.

He also condemned the US move in relocating its embassy to Jerusalem al-Quds, as well as the Gaza blockade and the killing of Palestinian people by the Israeli regime, adding “the OIC summit in Istanbul will be a good opportunity to discuss the current regional issues and developments.”

He further described Iran as a powerful country in the region, stressing that international conflicts and disputes must be resolved through dialogs and diplomatic ways.

An extraordinary summit of the Organization of the Islamic Conference (OIC) will be organized by Turkey in Istanbul on Friday, in condemnation of the US for opening the embassy in Jerusalem al-Quds and Israel for committing a massacre against the Palestinian protesters.